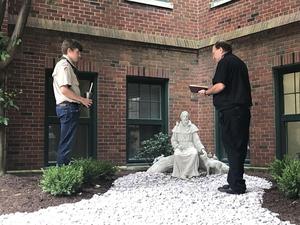 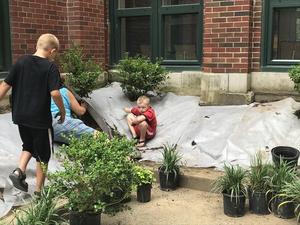 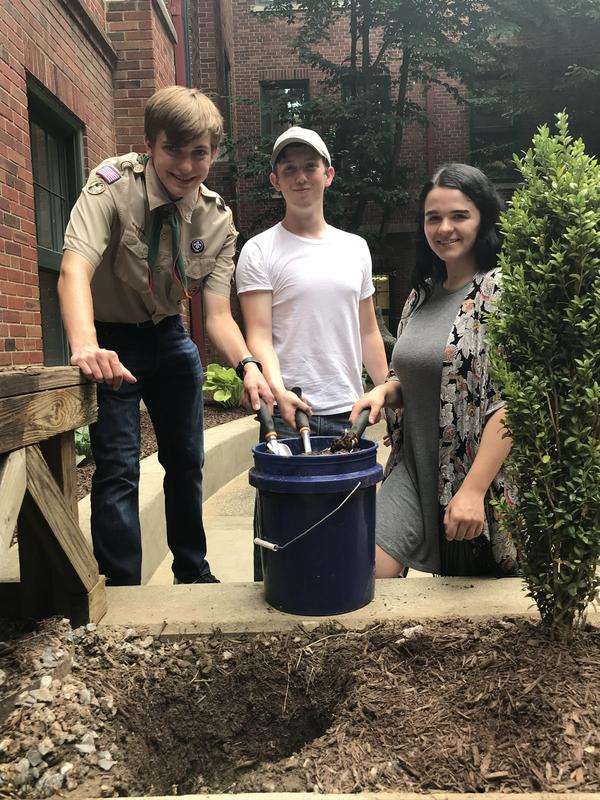 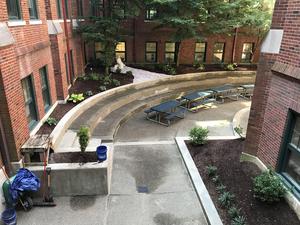 Michael Rykaceski ’19 completed a renovation of the courtyard space outside the OLSH cafeteria as his Eagle Scout project, updating the space with new plants and a statue of St. Francis.
Over the years many young men at OLSH have chosen to support their school through an Eagle Scout project, building and creating things to improve the function and appearance of various areas of the school. Previous projects have included storage cabinets in the music room, trophy cases, and a book cart for the library. This summer, Michael Rykaceski ’19 completed his Eagle Scout project, giving the OLSH courtyard a beautiful makeover. He approached the school administration and the Felician Sisters to propose the project, which involved replanting and revitalizing the courtyard located outside the cafeteria. Used as an outdoor lunch space for students and for various school special events, the courtyard is a unique space on campus. Michael’s project included planting new perennials throughout the space and installing a large statue of St. Francis. “I selected St. Francis because of his love of animals and the outdoors,” he explained.
Michael had the help of several members of his Boy Scout troop – Troop 435 from Hopewell, as well as assistance from his good friends Kevin Jones, Nathan Thompson, Hannah Hathaway, the OLSH maintenance team, and some other friends and family members. He also received support from Fratangelo Gardens, who helped Michael obtain materials at a discounted price and Eat ‘n Park and Kings restaurants who provided lunch while the group worked. The work was challenging, especially moving the 2 tons of dirt, 11 yards of mulch, and 2 tons of rock from the parking lot through the school and out into the courtyard, but, according to Michael, the reactions of the OLSH faculty, staff, and students as they saw the progress made the hard work worth it. Michael buried a time capsule to be opened in 25 years that contained materials from the school, including OLSHighlights magazine, a school view book, the student IDs of those who participated in the project, and a few other “secret” items. Fr. Frank Kurimsky, OLSH Chaplain, blessed the statue and courtyard on Monday, July 2, when the project was complete. Michael shared, “It was really fun to do this project and I hope that OLSH enjoys it for many years to come!”
Print