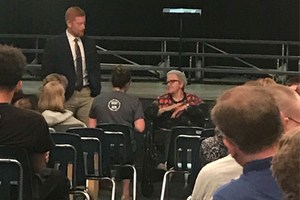 Ms. Shulamit Bastacky, a survivor of the Holocaust, shared about her life with members of the OLSH community last week.

Over 100 students, parents, faculty and staff came together last Monday evening to hear the story of Ms. Shulamit Bastacky, a survivor of the Holocaust. During her talk, Ms. Bastacky shared that she was one of the “Hidden Children” of the Holocaust – she was hidden away by a nun until it was safe to be reunited with her parents. History teacher Mr. Scott DeVivo, who organized the event, was struck by her message of forgiveness. “One powerful point that Shulamit made is that while it is impossible to forgive the murder of 6 million Jews, it is pointless to hate,” he commented. Ms. Bastacky told the audience about how she befriended a German woman who was born around the same time as her, but was the daughter of a Nazi. While their lives followed very different paths, they still became friends because there was no reason to hold on to the hate for what previous generations had done. She encouraged the group to make friends with different people from all walks of life to combat the excessive hate that exists in the world today. The event was a powerful experience for the OLSH students in attendance, giving them the opportunity to hear firsthand about a historical event they have studied in class.