An Echo Through the Decades: Serve where you are needed 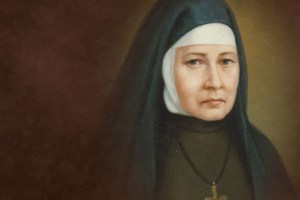 As we celebrate the 25th anniversary of the Beatification of Blessed Mary Angela Truszkowska, we would like to share her story, as written by Sr. M. Andrew Budinski '60.

Mother Mary Angela Truszkowska, foundress of the Felician Sisters, had the foresight to insist that her sisters keep chronicles of their lives and work. She herself was a prolific letter writer. Through the written word, she supported, celebrated, admonished and directed her daughters.

Blessed Angela’s chronicles and letters bear witness to her legacy.  Echoing from those pages is a mantra that has reached this generation as: serve where you are needed.  This phrase formed her childlike heart, unfolded during young adulthood, and flourished in the founding of the Felician Sisters.

The biographers of Sophia Truszkowski tell us that on May 16, 1825, she was born prematurely and inherited a frail constitution.  Because of her delicate condition, she was doted upon by parents and family.  She was a precocious child and the eldest of six siblings. Because her parents, Joseph and Josephine, feared for her health, they engaged a private tutor. She had a keen mind and her intellect soared under the tutelage of Anastasia Kotowicz, a dear family friend.  She was given the privilege of access to her father’s extensive library, which included volumes ranging from classic literature to spiritual books.  These tomes rounded out her education and she began to tutor her brothers and sisters.

In childhood, Sophia found clever ways to earn a few pennies, which she anxiously shared with the poor she met on the streets of Warsaw.  Her potential for piety soon became obvious as she began vying to be the first at daily Mass by waiting at the church doors in the very early hours of the morning. She was even able to convince her not-so-enthusiastic sister, Valerie, to accompany her.

In 1844, the tranquil life of Sophia was devastatingly interrupted by the death of her beloved sister, Valerie. Not only was it a premature death, but one caused by the negligence of a doctor who mistakenly administered poison rather than the intended remedy.  The shock of Valerie’s death at a few days short of her 17th birthday hung over the family like a funeral pall.

For many years, Sophia felt drawn to contemplative life.  She was convinced that she should enter the Visitation Cloistered Convent, but her father refused to give his blessing.  Because of his own declining health, he asked Sophia to accompany him to the medical baths in Cologne, Germany. She agreed and lovingly served as his devoted companion and nurse.  During a visit to the Cathedral of Cologne, Sophia knelt in prayer and was confident that she heard in the depths of her heart that she was not to enter the Visitation Convent.

Upon their return to Warsaw, Sophia, who was experiencing inner turmoil, decided to resume her routine of pre-dawn vigils and daily Mass. On occasion she saw children in the streets whom she believed to be orphans.  She realized that her few coins would not sustain them. With the support of her cousin, Clothilde Ciechanowski, who had the same burning desire to serve God completely, she rented a room in a garret and began teaching and caring for the street urchins during the day.  They also hired a woman to care for the children during the night.  Her father welcomed the opportunity to finance their efforts.

The Institute of Miss Truszkowski grew quickly, but they did not have funds for another caretaker.  After many sleepless nights and interior dialogue she and Clotilde decided to move into the Institute.  They gave of themselves completely.

On May 27, 1855, Sophia and Clotilde were received into the Third Order of St. Francis with a rule written for lay men and women.  As was the custom, they received new names.  Thus, Sophia became Angela, and Clotilde became Veronica.

On November 21, 1855, the two women pronounced a private, but no less solemn and binding, vow that they belonged completely to Jesus and would be committed to their work of charity.  Thus, a Congregation was born and the Blessed Virgin Mary was its foundress.

Angela and Veronica’s routine visits to the shrine of the Capuchin Franciscan St. Felix, patron of children, were a welcome sight for the city’s inhabitants.  It was these people who first called them the Sisters of St. Felix and they became affectionately known as “Felicians”.

Mother Angela watched the early expansion of her community throughout Poland.  While communication was difficult, the message to serve where you are needed was received and held close the heart of every Felician Sister.

On October 10, 1899, Mother Angela closed her eyes to this world and was embraced by the One who filled her heart and life, the One who compelled her to serve where she was needed.  It was no wonder that she wished to multiply herself a thousand times; how else could she respond to her Beloved.

The congregation grew from the confines of a garret to the extremities of the globe.  Works of charity spread first through Poland, then to Germany, France, and Italy, then Russia and the Ukraine. On November 21, 1874, five Felicians from Poland celebrated their arrival in Polonia, Wisconsin after a month-long, perilous voyage over land and sea.

Under the guidance of Father Joseph Dombrowski, who invited the sisters to evangelize the Polish immigrants, the sisters’ lives and work bore fruit beyond what they could have asked for or imagined.

Their pioneer spirit and disposition to serve supported them through the hardships of being foreigners in a foreign land.  They survived the tragedies of two fires that took their simple home and all the books and resources that they brought from Poland to help them in their ministry. Within four years, they had outgrown the space in Polonia and moved to Detroit, Michigan, which became the first Province of the Felician Sisters in America.

Invitations to serve where they were needed kept drawing the sisters to new ventures. Vocations were plentiful, and by the mid-twentieth century, eight thriving provinces existed in the United States and Canada. By the 21st century, the continuous growth of the Felician Sisters enabled them to expand across the globe to serve in the Northwest Territories, Africa, Brazil, and Mexico.

In 2009, after more than ten years of discerning, again on November 21st, the Sisters were reconfigured under the Patronage of Our Lady of Hope into one province of the Felician Sisters of North America.  The motivation behind this step was to further to the mission of the Felician Sisters in spite of the reality of their diminishing numbers.

The sisters do not thrive on numbers but on wisdom, age, and grace. Serve where you are needed are words that still echo in the hearts of the sisters. Those words are endowed with a spiritual energy that empower Felicians of all ages to fulfill Mother Angela’s wish to multiply herself a thousand times to show God’s love.