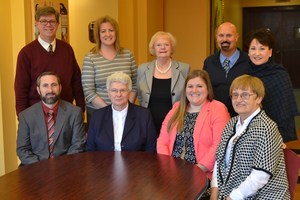 For the past 18 months, Our Lady of the Sacred Heart High School has been actively engaged in a self-study and preparation of its application for reaccreditation by the Middle States Commission on Higher Education. Last week, a four-member Middle States Validation Team, consisting of Sr. Mary Ann Bednar (Team Chair), Katie Gray, Cathy Jakubowski, and James Koser, visited OLSH to review the self-study and planning documents that the school submitted.

The Middle States Team members arrived on campus on March 6. After they settled into their convent accommodations – graciously provided by the Felician Sisters in Coraopolis – they attended a welcome reception with members of the faculty, staff, Board of Directors, and other members of the OLSH Middle States Strategic Planning Committee. The Team then spent the week reviewing documents, visiting classrooms, and meeting with various members of the OLSH community, including select groups of students.

After four days of review, the Middle States Validation Team visit concluded with a presentation of their Oral Report.  This report was intended to offer glimpse of the longer written report that will follow in the coming weeks.

While the report included both strengths and proposed areas for improvement, the accolades far outweighed the areas of suggested focus.  Sr. Mary Ann began her report by saying it was clear that “Students are at the heart of all that happens at OLSH.” The Team also praised OLSH for their “strong Catholic identity” and for their dedication to a mission that seeks to immerse students in the Felician Core Values. In fact, the team noted that OLSH exceeds the Middle States Mission standard.  Other areas of commendation included the rigor of the curriculum, the number and variety of activities and athletics offered, and the clean and well-maintained facilities.

In the end, the Team concluded that OLSH meets all 12 standards for accreditation and it will recommend that the school be reaccredited for 7 years.  The OLSH Middle States Committee Chairs, Barbara Desman, Brian Molka, and Amy Turnbull, were thanked for their hospitality and the work they put into the reaccreditation process. Sr. Mary Ann said that during her stay, the Team often heard people say that “OLSH is a family”, and she was pleased to say that she and her Team experienced that first-hand.