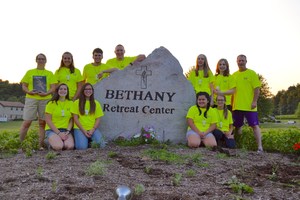 Frenchville is known as the second poorest community in Pennsylvania. In a country that has so much to offer, it’s shocking to see that there are still a number of people living in deplorable conditions. Joined by others from Buffalo, Greensburg, and New Jersey, the volunteers helped to shingle roofs, cleaned debris from houses of people who could not do it themselves, helped on a farm and in a vineyard, and reconstructed a porch. In one case, Children and Youth Services (CYS) decided not to remove the children from a home because of the work done by the volunteers.

There were many other moments of inspiration as well. Corinne McDevitt ’19 said, "Every second of service we put in was paid for in the fantastic stories of those we were assisting." Juliana Grimm ’20 was inspired by the impact that Young People Who Care had on the community, noting that just having some to talk to and who would listen helped make a day better for those they served.

On the final night of the trip, a 70 year old volunteer named Carl from Greensburg, asked the group to not let their service to God and their community end after they left, asking them to continue to share the gifts that God gave them with the world.

This year’s mission trip was truly an amazing experience that saw a number young people grow as individuals as well as in their faith.