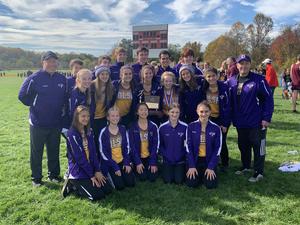 Girls Cross Country captured its first WPIAL Championship this fall and followed it with a 5th place finish at States! Boys Cross Country also qualified to States and finished 11th.
2021 was an historic season for the OLSH Cross Country teams. A WPIAL title for the girls, both teams qualifying to the PIAA State Championship in the same year, and the team's highest PIAA finishes on record made for an exciting end to their season.
At the PIAA State Championship, Max Hamilton placed 31st with a time of 17:55 to lead the boys team to an 11th place finish in the state. Peter Sweeney ran 18:47, Will Stickman ran 18:59, Ryan Kozy ran 19:09, and Michael Urban ran 19:51 to finish off the scoring.

At the WPIAL Championship, Audrey Wrabley medaled and led the girls team to an upset of #1 state-ranked Mohawk with a strong 3rd place finish and time of 21:20. It was the first WPIAL Team cross country title for the OLSH girls after several back to back WPIAL Team Runner-Up placings. Malley Aiello finished 17th (22:19), Abby Wertz finished 21st (22:35), Margaret Sweeney 22nd (22:39), and Gianna Mosca finished 35th to finish out the team scoring with a time of 23:24. Kyleigh Nagy (23:42) and Faith Gartley (23:55) were close behind.

The guys cross country team hadn't made states in a long while after 5-6 years of just missing States by one team spot. However, this year the team overcame that jinx and made States as a team by placing 4th at WPIALS. Max Hamilton medaled with 13th place overall and a time of 18:30. Peter Sweeney wasn't far behind with a time of 18:42 good for 20th place. Ryan Kozy finished 35th (19:11), Will Stickman 39th (19:14), and Michael Urban closed out the scoring with 51st place and a time of 19:55.
Print