Inspired to Give Back: Meet Mrs. Erica Hollabaugh '04 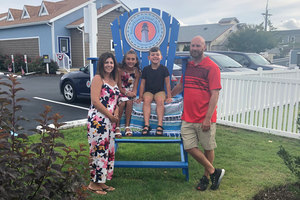 After being inspired by her English teacher at OLSH, Mrs. Erica Hollabaugh '04 knew she wanted to pay it forward.

OLSH English teacher Erica Hollabaugh ‘04 always loved writing and knew that she wanted to be a teacher going into college. In fact, she credits her passion for teaching to her former high school English teacher, Mrs. Maureen Steuernagel.

“Mrs. Steuernagel was so much more than an educator to me,” Erica said. “She was a constant support system who inspired me to be my best. She made such a difference in my life and is the reason that I became a teacher. I hope that I can do the same for my students today.”

After graduating from OLSH in 2004, she earned her English degree and secondary education certificate from Robert Morris University in 2008. She then received her master’s degree in Instructional Leadership from RMU in 2012.

She taught 7th and 8th graders at St. Alphonsus in Wexford for 8 years, but then began to look for a change in her career. She saw that OLSH was hiring and contacted principal Tim Plocinik about the opportunity.

“I told my husband that my ideal teaching job would be to return to OLSH and teach English,” Erica said. “I wanted to give back to the community and at least attempt to inspire students the way I was when I was there.”

“The AP class is very writing-heavy, but I love to watch my students’ growth in writing over the course of the year. Hopefully it is rewarding for them too,” Erica said. “We focus on nonfiction which is a different perspective of literature for the students.”

Erica hopes to instill seniors with practical applications of English such as writing a resume and being prepared for an interview.

“I’m not your typical English teacher - I don’t reread the classics or write poetry. To me, writing and speaking are just as important as reading,” Erica said. “My students need to be able to comprehend and communicate formally in college and in different careers; I want to help them be skilled and proficient communicators.”

Erica cares for her students’ success outside the classroom as well. She has been Head Cheer Coach for OLSH for 3 years and is focused on building camaraderie through the program.

Erica is proud to have expanded the team’s numbers and is excited to implement new opportunities for the girls. She hopes that moving forward from Covid-19, they can focus on reviving school spirit and get students excited for athletic events again.

In addition to teaching and coaching, Erica has been a Chi Rho faculty leader, helps to facilitate the Bella and Adulting 101 activities, and is on the Scholarship Selection Committee for incoming freshmen.

Erica hopes that through her involvement and dedication to her students, she can inspire them to be their best.

“It wasn’t until I became a teacher here that I truly understood how much effort the faculty at OLSH put into making your time here so special. It’s more than just teaching; they are there to be a part of your entire experience. I always recognized it as a student, but didn’t realize how much dedication it takes to do it,” Erica said.

After everything that OLSH has inspired Erica to be, she is grateful to be a part of that same legacy for her students.

“That’s the kind of dedication and concern that OLSH brings out of you,” Erica said. “You don’t just show up to teach - you embrace students on good and bad days, you are supportive and act as a role model. OLSH creates a legacy for being a special environment for students and staff alike.”

Erica and her husband Nick have an 8-year-old daughter Gia and 6-year-old son Easton. Their pets include a dog (Belle), a cat (Kylo Ren), and a gecko (Thor). Her hobbies include cooking, gardening, shopping and spending time with her parents and sister Brianna ‘09.