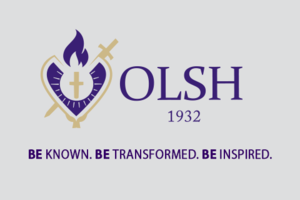 Congratulations to the recipients of OLSH scholarships for the 2021-2022 academic year. These students were awarded a total of $61,750 for the upcoming school year.

Each spring OLSH has the pleasure of awarding a number of scholarships to current and incoming students who demonstrate excellence in a variety of areas. Offering a range of scholarships in addition to a comprehensive financial aid program provides families support in making an OLSH education possible.

Zoë Blankenship ’22 was awarded the Susan Fahey Memorial Scholarship, which was established in memory of OLSH’s beloved Spanish teacher, Miss Susan Fahey, who passed away after a long and courageous battle with cancer. The scholarship is awarded annually to an OLSH junior who is planning to take an upper-level language course in his/her senior year.

Bernie Komoroski ’22 was selected to receive the John A. Mihaloew Endowed Scholarship. This scholarship is awarded annually to an OLSH student entering his or her senior year of study, who demonstrates creativity and “out of the box thinking”, and who has made a significant impact at OLSH and/or in the community.

Nathaniel Schmid ’23 was awarded the Mary E. Falbo Petrucci ‘47 Memorial Endowed Scholarship. This scholarship was established by Antoinette M. Petrucci, in honor and memory of her late mother, who was a member of the OLSH class of 1947.  This 2-year, renewable scholarship is given to a rising 11th grader at OLSH, with preference to a student who is a member of St. Joseph Parish in Coraopolis.

Camten Fazzino ’24 and Lucas Vittorino ’24 were each awarded the The Poleski Family Endowed Scholarship. This full-tuition, renewable scholarship is awarded annually to a student who demonstrates a love of learning as well as a propensity for helping people, and who exudes empathetic concern for others. This year the benefactors of this scholarship selected two recipients.

Faith Gartley ’24 was selected to receive the Collier Family Incentive Scholarship, a renewable scholarship awarded to a student who demonstrates a love of learning as well as a propensity for helping people, and who exudes empathetic concern for others. This scholarship winner is chosen from among the remaining applicants to the Poleski Family Scholarship.

Noel Goodwin ’24 and Alexis Penatzer ’24 were selected to receive the Annie ’10 and Luke ’11 Collier Pay It Forward Scholarship, for their demonstration of service and compassion for others. These scholarship recipients are also chosen from among the Poleski Family Scholarship applicants.

Mary Grace Gauntner ’24 and Noel Goodwin ’24 were the inaugural recipients of the Sr. Mary David Krasowski Endowed Scholarship, an annual scholarship awarded to two rising OLSH sophomores who demonstrate a level of understanding and appreciation of the Felician Core Values that sets him/her apart from their peers, and the ability to articulate the importance of those values in living a life of exceptional Christian leadership, stewardship, and service to all.

Kieran Tyler ’25 from Blessed Francis Seelos Academy and Bailey Ye ’25 from Archangel Gabriel School are this year’s recipients of the St. John Neumann Endowed Scholarship, a four-year renewable merit scholarship reserved for those who have a deep intellectual curiosity, are committed to excellence in their academic work, and will undertake the most rigorous academic programs at OLSH. These students have demonstrated academic and leadership potential at the elementary/middle school level.

Mariah Mars ’25 from St. James School is the recipient of the renewable Frank J. Smida Jr. Annual Scholarship which benefits a working-class family with a strong desire to provide their children with a Catholic education.

Alessia Mattucci ’25 from Holy Cross Academy was awarded the William J. Wolf Endowed Scholarship, which was established in memory of OLSH benefactor William J. Wolf. It is awarded annually to a Catholic young woman who possesses exceptional academic ability and is enrolled at a Catholic elementary school.

Caleb Mutschler ’25 from St. Monica Catholic Academy is the recipient of the Sr. Mary Christopher Moore Endowed Scholarship, awarded to an incoming freshman who demonstrates a sincere desire to be known, transformed, and inspired as a student at Our Lady of the Sacred Heart High School.

Liam Rains ’25 from Sts. Peter & Paul School was awarded the Sister Mary Denise Bernas Scholarship, which is given annually to a well-rounded incoming freshman boy who manifests good character and judgment through a spirit of volunteerism in a school, parish, or community.

Sarah Nagel ’25 from Archangel Gabriel School received the St. Therese of Lisieux Annual Scholarship which benefits a student who has been personally impacted by chronic illness and exemplifies resilience in the face of adversity.

Edwin Bueso ’25 from St. Monica Catholic Academy was selected to receive the St. Felix Service Scholarship which is awarded annually to an incoming freshman boy who displays academic achievement, exemplifies a life of true Christian presence, and a commitment of service to parish and community.

Sarah Nagel ’25 from Archangel Gabriel School and Noah Wheeler ’25 from New Brighton Middle School were awarded the St. Clare and St. Francis Scholarships, which are given to a well-rounded, motivated incoming freshman girl and boy who displays academic achievement, demonstrates leadership potential, exemplifies a life of true Christian presence, and is involved in extra-curricular activities and community service.

We are so proud of all of our scholarship recipients and their accomplishments that have led to their selection for these awards! To learn more about these and other scholarships offered at OLSH, please visit our Scholarships page.
Published June 15, 2021 Print