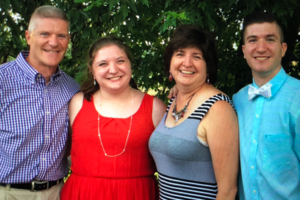 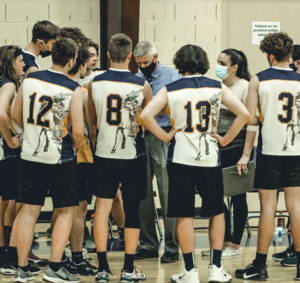 OLSH Athletic Director and Head Coach for both girls and boys volleyball teams, Michael “Coach Mac” McDonald, has been an integral part of the OLSH Athletic Community for 35 years. With his family also involved at OLSH for years, Coach Mac is proud and grateful to be a part of a community that inspires team players both on and off the court.

With a life-long passion for high school sports, Mike McDonald always knew that he wanted to become a coach and Phys. Ed. teacher. This love for athleticism led him to receive a “good, old fashioned education” at Edinboro.

“It was extremely hands-on. We had to take gymnastics, dance, and all kinds of different sports classes to have a better understanding of how to best teach our students,” Mike said. “Health and Phys. Ed. are not taught that way anymore.”

After graduating from Edinboro University with a degree in Health and Physical Education in 1985, Mike began substitute teaching and got his first coaching job at North Hills High School in 1986.

In 1987, he received a call from Chris Smallwood, OLSH Athletic Director at the time, asking about his interest in becoming the girls volleyball coach at the school. It wasn’t long before Michael found himself with a new job and a lifelong nickname.

“Chris told me that he didn’t care if the team ever won a game. All he said was that I had to treat the kids well and be a good role model for the team. I liked what I saw at OLSH and became the fourth-ever girls volleyball head coach that fall,” Coach Mac said.

As is typical for OLSH faculty and staff, Coach Mac became more involved with different facets of athletics and academics at the school. From 1990 to 1992, he worked in advancement as OLSH Development Director.

In 1992, Coach Mac gave up his other coaching and teaching commitments to become the OLSH Athletic Director, and later stepped into the roles of health and physical education teacher.

In the spring of 1992, Coach Mac also initiated the first boys volleyball team at OLSH. He became the first boys head coach and has been the only one since.

Except for a short 6-year period where his duties as Athletic Director were split between two positions, Coach Mac served as Athletic Director, health and gym teacher, and girls and boys volleyball coaches since then. He celebrated his 30th year as a full-time OLSH employee in 2020.

“The OLSH athletic program has grown a lot since I started here,” Coach Mac said. “The last 5-10 years have been absolutely amazing. Every single program competes at a very high level for both individuals and teams.”

Coach Mac has always been proud of his girls and boys volleyball teams and their good times together over the years. He can even still remember the names of his first girls team at OLSH in 1987. Coach Mac enjoys seeing the teams go to the playoffs each year as well as maintain a good reputation with other schools.

The years that his son, Shaughn, played on the OLSH volleyball team were especially memorable for Coach Mac.

“The years my son played for OLSH were really special,” Coach Mac said. “We made it to the State Playoffs; that team was made up of a great group of guys.”

Coach Mac and his wife Susan - who might be better known as former OLSH Guidance Counselor, Mrs. Mac -  have 2 children, Lauren ‘12 and Shaughn ‘14. The McDonalds have always been a dedicated sports family. Shaughn played volleyball for Saint Francis University and is now the assistant women’s volleyball coach at his alma mater. Lauren played girls volleyball at OLSH and Susan played for the Pitt Women’s Volleyball team when she was in college.

“I really enjoyed watching my kids play and now coach. It’s been neat to follow my kids in their careers, especially when the four of us were all here at OLSH together,” Coach Mac said.

This year is Coach Mac’s 35th year of coaching and he has no plans for slowing down any time soon. When he does step down however, he wants to ensure that the program continues to thrive with his successor.

“I still enjoy it and I will coach as long as I do,” Coach Mac said. “I don’t want the program to be different when I leave; people shouldn’t even notice I’m gone. I know that I won’t step down without knowing that the program is in good hands because I still want OLSH to be just as awesome as it is now.”

Coach Mac is very grateful for his career at OLSH and has enjoyed seeing the athletic program prosper over the years. He hopes to continue to see its success for years to come.

“It is incredible to watch our kids and coaches accomplish what they have these past years. I am so grateful to be a part of it,” Coach Mac said. “I feel very fortunate and blessed to have found a job I enjoy at a place that I have loved my entire career.”