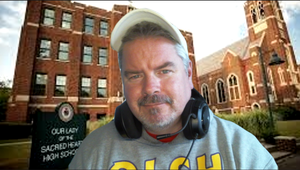 OLSH Calculus Teacher, Michael Schuster, has been teaching at OLSH for 18 years. He strives to make his classroom a place where students can be challenged to learn and grow. Mike also loves his work as an assistant football coach and being kept busy by his 3 kids.

“If OLSH alumni ever get asked which class they grew up the most in, I’d be very disappointed if my class wasn’t mentioned,” OLSH calculus teacher, Michael Schuster said. “I put a lot of emphasis on growth in my classes. I get to see kids’ transformations during their time here.”

A member of the OLSH community for 18 years, Mike has always upheld a high standard for the students in his classes and has enjoyed watching his students grow.

“I’m not the same teacher I was in 2003, but I have never changed my high expectations for my students. Schuster’s class will make you grow up really fast,” Mike said.

After graduating from North Catholic High School, Mike attended Duquesne University, earning his Bachelor's degree in Education for Secondary Math. He began working as a substitute teacher after graduating in 1990, but returned to Duquesne in 1995 to pursue his MS degree in Information Systems Management.

Mike worked as an analyst, programmer, and contract worker for a business in Pittsburgh for several years after graduating from Duquesne again in 1997.

After being interviewed by Sr. Francine and inspired by the new renovations of the campus, Mike began his career at OLSH in 2003.

“I’ve always been thankful for the stability here,” Mike said. “I have a great job in a nice place and I have never had to worry about employment. Teaching can be stressful, but being here has been a blessing to me.”

Mike has taught a variety of advanced math classes from Statistics to advanced Calculus. His proudest achievement at OLSH is initiating the AP Calculus classes for the students in the 2007-2008 school year.

“AP classes were not as big back then,” Mike said. “The AP offerings in the school have grown a lot since 2007, but my claim to fame is starting one of the first offered at OLSH.”

Mike met his wife, Beth (King), OLSH class of 1996, at Duquesne. The couple married in 2000 and have 3 children: Zachary (9th grade), Isabella (7th grade), and Max (2nd grade). In addition to being busy with school and other extracurricular activities, Zachary and Isabella love competitive swimming with the Northgate Stingrays swim team.

“My kids’ whole life, and therefore most of our family life, revolves around swimming,” Mike said. “My wife is all-in for these kids and their love of the sport.”

During a short break between swimming seasons and when Mike is off from teaching in the summer, the Schusters vacation with their extended family at the beach. The vacations keep getting bigger and bigger each year as more of Beth’s 7 brothers are beginning to have children. They have been to beaches in Virginia, Delaware, and New Jersey over the years.

In addition to his family’s passion for swimming, Mike has another passion of his own: being an assistant football coach. Mike played football in high school at North Catholic and continued at Duquesne University. He has coached at North Catholic, Deer Lakes, and Cornell.

Mike has been the linebacker coach for Chartiers Valley since 2017 and is proud of the way the program has grown over the years.

“Being a high school football coach at other schools has been my alternate career,” Mike said.

Mike has many commitments outside of OLSH, but he is known for always helping with OLSH Haunted Hallways and dressing up as “The Emperor of Darkness” in his classes for Halloween.

One year, Mike helped coach the OLSH Girls Bowling Team with retired OLSH teacher, Bob Brasko. Not knowing much about the sport, he agreed to help and ended up having an exciting season with the team. The team won the section championship, earning Mike his first and only high school championship ring!

“For all the teams I have coached,” Mike said, “it’s funny that my only team championship ring is from helping out one year with Girls Bowling!”

Mike is proud to be a part of the community at OLSH, knowing that his experience and dependability at the school have been valued by his colleagues.

“I’m just the quiet guy in the back of the third floor hallway, but I am proud to think that I have contributed to OLSH and have been a dependable part of the community all these years,” Mike said.

Mike keeps the same attitude about teaching that he always has: to challenge students to grow and learn to be their best.

“I really enjoy having a relationship with my students,” Mike said. “It’s like planting a seed and then walking away; you just have to hope you had a positive impact on their futures.”