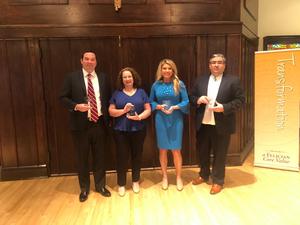 The fourth annual OLSH Distinguished Alumni Awards brunch was held on Sunday, October 11 at the school, honoring four outstanding OLSH alumni.
On Sunday, October 11, OLSH Homecoming Weekend concluded with the 2020 Distinguished Alumni Awards. The breakfast and award ceremony was held at the school in Founder’s Hall and livestreamed on the OLSH website. Those watching from home included some former OLSH teachers who taught each of the awardees! While smaller than in year’s past, the four alumni honored that morning seemed to appreciate the intimacy of the ceremony. Holding the event on campus gave them the opportunity to walk the school hallways again and reminisce while showing off their old stomping grounds to close family members who have never seen the school.
Haley Hinds ’04 – OLSH Young Alumnus Award
Anchor and reporter at Fox 13 News in Tampa, Florida
Evan Axelbank, her husband and fellow Fox 13 News reporter, introduced Haley Hinds. In her speech, Haley remembered her days of anchoring on WCHR, OLSH’s morning news program. Her experience with WCHR brought out her passion for broadcast journalism. The values instilled in her by the Felician Sisters help her to show compassion for others in her reporting.
Deena E. Swank '92 - OLSH Alumnus with Heart Award
Director of External Communication for the Felician Sisters of North America
Mr. Tim Plocinik, former teacher and now principal at OLSH, introduced Deena Swank. Tim reflected on a speech Deena previously gave that listed 10 ways to be a good alumnus – and noted that Deena embodies all 10. In her acceptance speech, Deena talked about how she never could stay away from OLSH because the school became a part of who she is. After working at the school as a teacher, she came back in several staff roles before accepting a position with the Felician Sisters, allowing her to still maintain a connection to OLSH through her work.
Daniel C. Gallagher '02 - OLSH Christian Leadership Award
Religion teacher & Assistant Campus Minister at Central Catholic High School; Executive Director and co-founder of Move a Mountain Missions
Dan Gallagher’s brother, John ’06, gave a moving introduction, speaking about Dan’s strong commitment to his faith. Dan shared in his speech that, “The one great tragedy in life is to not become a saint – to not give everything over to God.” He lives by that philosophy, performing God’s work daily and giving praise to God through all things.
Michael J. Kavic '98 - OLSH Professional Excellence Award
Associate professor in the department of Chemistry & Physics at the State University of New York at Old Westbury
William Stickman '98 introduced his classmate and friend, Michael Kavic, and spoke highly of Mike’s many accomplishments throughout his career. Michael shared short anecdotes of the OLSH teachers who influenced him during his time as a student. He noted that their he continues to incorporate their lessons into his daily life, saying, “Each of you gave me a thread that allowed me to weave the tapestry of my life, and I will be forever grateful.”
One common theme among all the acceptance speeches was an appreciation for the education and opportunities provided by OLSH and the Felician Sisters. To hear more from the honorees, you can view their speeches below, or by clicking here.
Print