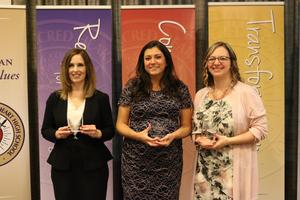 Last weekend, four OLSH alumni were recognized for their achievements at the annual Distinguished Alumni Awards brunch. These four women are outstanding representatives of OLSH, as each carries the values instilled by the school into their professional lives.

Honors an OLSH alumnus who has graduated within the past 15 years who has distinguished
themselves in one or more of the following areas: service, leadership, academics, professional achievements.

Anne Collier shows compassion in her job everyday as an Associate Veterinarian at Greentree Animal Clinic. Annie provides physical exams, treatments, and surgical procedures to both ordinary and exotic animals on a daily basis. Through it all, she works gently with her animal patients and their human families in order to establish a high level of comfort, even in difficult or scary situations.

While completing her degree at Cornell University, Annie was a member of several honor societies and organizations, including the Cornell University Shelter Medicine Club and the Veterinary Business Management Association. She was an active member of Cornell University’s parish and the Veterinary College’s Christian Group. Annie uses her professional experience to give back to her community in a number of ways. She helps local Girl Scout troops earn their “Pet Badge”; she assists in the rescue of shelter animals; she mentors OLSH students interested in veterinary science; and she taught middle school anatomy labs at the former Holy Trinity School in Robinson Township.

Honors an OLSH alumnus who exemplifies one or more of the Felician Core Values (Respect for Human Dignity, Compassion, Transformation, Solidarity with the Poor, Justice & Peace) and maintains a strong connection to OLSH.

Jessica Sellman brings her dedication to OLSH to her job every day as the Director of Admissions and Enrollment at the school. She earned her Bachelor of Arts in Communication Studies from Duquesne University in 2006, following it up with a Master of Business Administration from Duquesne a year later. After working in marketing and business development for several years, Jessica found her way back to OLSH in 2013, this time as an employee.

Devoting countless hours to her work, Jessica can be seen giving tours of OLSH when the school is closed, manning booths for the school at various evening & weekend community events, and leading both the OLSH Student Ambassadors and Junior Achievement programs. Jessica volunteers to lead the annual OLSH Chi Rho Retreat, where she witnesses students’ journeys to transformation and growth in their faith over a long weekend spent in prayer and camaraderie. Jessica believes strongly in the value of a Catholic education and works to spread that belief to others. Always running from one event to the next, her pride in OLSH and in her students shows in everything that she does.

Honors an OLSH alumnus who has distinguished themselves through community service, devotion to faith, and/or philanthropic efforts.

Dr. Jessica Hoyson exemplifies the Felician Core Values through her work as an Obstetrician/Gynecologist, Physician Lead with Allegheny Women’s Health. From a young age, Jessica felt called to provide service to her community through science and medicine. She received her bachelor’s degree in Biological Sciences with a minor in Science, Technology, and Values from the University of Notre Dame, where she was an active member of the Campus Ministry team. Throughout her professional career, Jessica’s research has been published several times and she has worked hard to help her colleagues achieve the same thing.

Jessica is currently working on a project to expand services for women with physical and mental disabilities. Working with the board at Allegheny Valley School, Jessica has developed protocols more in line with the American College of Obstetrician’s recommendations for screening and opened her office hours early so that women at AVS can attend appointments without the stress and distractions of a crowded waiting room. With the help of her colleagues and outside donors, Jessica’s goals of providing traveling services and the equipment necessary to best assist her patients, are well underway.

Honors an OLSH alumnus who has distinguished themselves in their profession.

Jacilyn Maher is an accomplished employee in the STEM field, working at the National Aeronautics and Space Administration (NASA) Johnson Space Center since 2000. She graduated from Allegheny College with her B.S. in Physics and continued on to the University of Colorado at Boulder, where she earned her M.S. in Aerospace Engineering. She has held several different positions during her tenure at NASA, currently working as the ISS Program’s integration lead for sharing United States Commercial Crew Vehicles data with the ISS International Partners. Jacilyn was recently selected for the position of Chair of the ISS Safety Review Panel where she will be responsible for assuring the safety of hardware and associated operations on the International Space Station.

Jacilyn is devoted to animal care efforts, serving as a volunteer with several advocacy groups, including the Johnson Space Center’s Institutional Animal Care and Use Committee, the Wildlife Center of Texas, the Texas Marine Mammal Stranding Network, and the Houston Zoo.