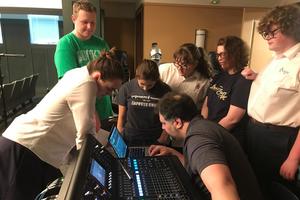 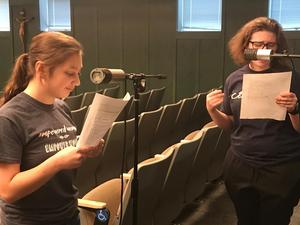 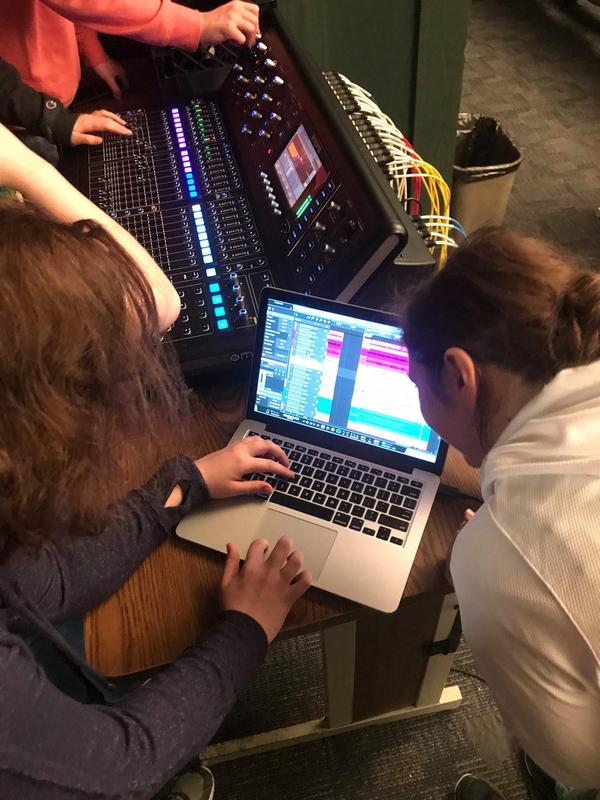 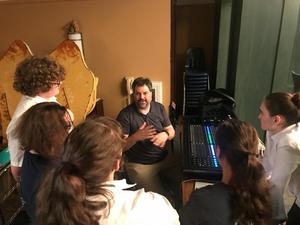 OLSH Theatre students participated in a multi-session sound workshop led by audio professional David Sykut. The group learned about sound and how to use various pieces of sound equipment, and put their knowledge into action by recording a radio show.

In the last few years, the OLSH theatre department has expanded to more than just the annual Spring Musical. The group now performs a fall play, has taken on the annual Christmas play, and offers summer camps and workshops for students of all ages. This year, students were invited to participate in a sound workshop that took place over the span of a few weeks in the spring. The workshops were led by Mr. David Sykut, a production manager for MCG Jazz in Pittsburgh and an adjunct professor at CCAC. He knows OLSH theatre director Ms. Dolores Manuel through some community theatre productions and actually did sound design for OLSH’s production of The Sound of Music back in 2003. Manuel invited him back to do sound for last year’s production of Beauty and the Beast and again for this year’s Once Upon a Mattress. “I’ve really enjoyed getting to know the students at OLSH,” he said. “They have good hearts and want to learn.”

Learning more about what’s happening “behind the scenes” while she’s onstage performing is the reason why Margaret Matous ’20 decided to attend the sound workshops. “I think it’s really interesting,” she commented. “It’s cool because now I know more about what makes the show successful.” The students learned about the different types of microphones and why they are used and about how sound works and the different factors that affect sound in an auditorium. They also learned how to use the soundboard and the equalizers. To put their new knowledge into practice, the participants recorded a radio show. They found a script, assigned parts, and then worked together to select the appropriate sound equipment for each actor. “We had to choose a mic that would best pick up a lower voice for one part and a figure-eight shaped mic that two people could use so that they could face each other and interact more naturally,” Margaret explained. For their final session, the students worked with Sykut to edit their radio show. He is putting on the finishing touches and the final product will be shared on social media soon.

For Sykut, running workshops for students is an opportunity for him to give back while sharing something he is passionate about. “Sound design for musical theatre is really important and many schools and community theatre groups don’t have anyone who knows how to do it,” he explained. “Sound often gets overlooked, even though it’s a big part of a production and there aren’t a lot of opportunities for kids in high school to learn how to do it. I want to share my knowledge with the students.” Sykut has continued to help produce sound for other OLSH events, including the upcoming fine arts festival, and plans to continue to work with and teach OLSH students.