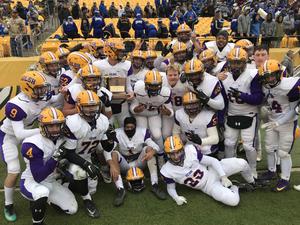 The Chargers beat the Rochester Rams 28-6 at Heinz Field
The OLSH Chargers football team dominated the Rochester Rams in the first half starting with Eric Olexa forcing a turnover on Rochester’s first offensive play. The game remained scoreless and focused on defense as the teams’ opposite offensive styles proved unsuccessful. Then Tyler Bradley ran the ball in for the first touchdown of the game and then threw a nice pass to Andrew Schnarre for the second TD. Ryan Gehring was solid with both extra points. Senior Noah Campalong was taken out in the 2nd quarter with an injury.
The Rams scored a touchdown in the 3rd quarter but the Chargers were able to hold them off. Sig Saftner and Richard Banks each score touchdowns in the fourth to take the score to 28-6. Bobby Brazell with an interception with 4:27 left in the fourth quarter gave the Chargers control at the end of the game.
The Chargers win OLSH’s first WPIAL Football Championship in school history in the program’s 9th year. The team now continues in the state playoffs as they work to earn a trip to Hershey for the PIAA Championships on December 6.
Print