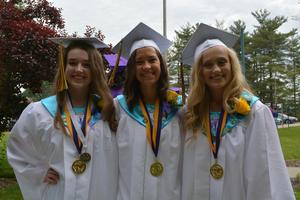 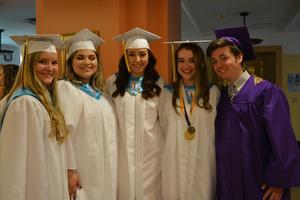 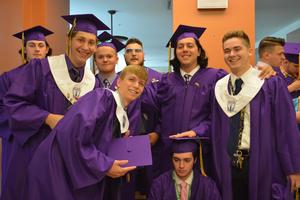 OLSH held the 84th annual commencement exercises on Sunday, June 3, marking the graduation of the class of 2018.
On Sunday, June 3, the OLSH Class of 2018 participated in the 84th annual Commencement Exercises at the Angela Activities Center. The 66 members of the class began the day with the formal class graduation portrait that will be added to the OLSH halls this summer. Then the students processed down to the AAC followed by the faculty. Student speakers included salutatorian Jennifer Falgione, who encouraged her classmates to uphold a Christian attitude and always be humble and kind (quoting the popular Tim McGraw song). Co-valedictorian Emily Halbedl focused her speech on the wisdom of Winnie the Pooh and inviting her classmates to "Achieve great things, but don't lose yourself along the way." Co-valedictorian Alexis Moskala asked the class of 2018 to think about what would be next and urged them to go out and achieve their dreams. Remarks were also given by president Terry O'Rourke Donoghue, who challenged the class to become "Take Chargers", keeping in mind the strong, courageous Charger mascot. Prinicpal Tim Plocinik, who also served as emcee for the afternoon, encouraged the students to thank those who helped them achieve over the last four years. The audience was treated to a performance by the OLSH Concert Choir, who performed "Seize the Day" from the movie Newsies, and "May the Road Rise Up", a traditional Gaelic blessing. Following the distribution of diplomas, Deena Swank '92, alumni and parent relations manager, welcomed the students as OLSH Alumni.
The entire ceremony was live streamed and can still be viewed by following this link: https://livestream.com/accounts/26082927/events/8199877
Print