OLSH Celebrates Baccalaureate Mass for the Class of 2018 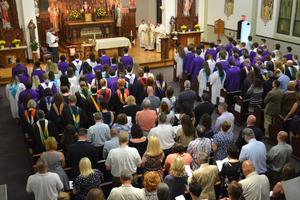 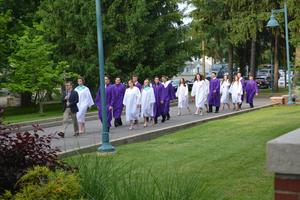 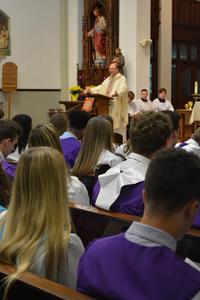 The Baccalaureate Mass for the Class of 2018 was celebrated on Thursday, May 31, providing the class one last opportunity to celebrate Mass together with their families in the OLSH Chapel.
The OLSH Baccalaureate Mass for the Class of 2018 was celebrated on Thursday, May 31 in the OLSH Chapel. OLSH Chaplain, Fr. Frank Kurimsky was the celebrant, along with Fr. Mike Ackerman, Director of Vocations for the Diocese of Pittsburgh, and Deacon Joseph Compomizzi. In his homily, Fr. Frank encouraged the students to be good people, kind and caring to others, as they go out into the world. Several members of the Class of 2018 participated in the Mass, including co-valedictorians Emily Halbedl and Alexis Moskala, who served as readers; Ganina Gonzalez, Celeste Kristek, and Grace Lipscomb, who served as cantors; and the class officers, Emily, Alexis, Brooke Gallagher, and Ian Polidora, who brought up the gifts. Principal Tim Plocinik addressed those in attendance, reinforcing the message from Fr. Frank's homily about going out and rebuilding a culture of decency and a culture of being Christian.
The Baccalaureate Mass served as a final opportunity for the Class of 2018 to celebrate Mass together in the OLSH Chapel, along with their parents and other family and friends, and the OLSH faculty. The Mass was also broadcast via live stream to include those who could not physically attend. The Class of 2018 looks forward to the Commencement Exercises to be held Sunday, June 3 at 12:00 pm. The ceremonies will also be broadcast live. Please use this link: https://livestream.com/accounts/26082927/events/8199877 to view.
Print