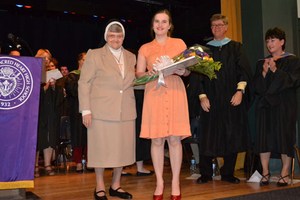 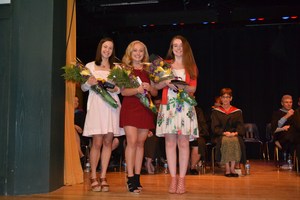 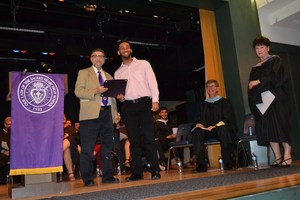 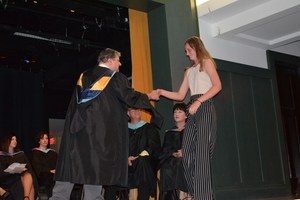 At the end of each year, the OLSH community comes together in two ways to recognize the accomplishments of OLSH students. The annual Honors Convocation is held to promote academic achievement with the bestowing of Class Awards, recognition of Scholarship and Grant offers to the graduating class, and through miscellaneous other awards and scholarships. OLSH’s top faith and service awards are also given during this evening celebration. The next day, during the school day, the Honors Assembly is held. During this event, students are recognized for achievements in various athletic and extracurricular activities.

OLSH’s most prestigious award, The Blessed Angela Award, is given to a senior who exemplifies the values, character, and spirit of Blessed Mary Angela Truszkowska, foundress of the Felician Sisters. Kathryn Dickey was the recipient of that award this year for her compassion and witness.

The students in each grade with the highest academic average for the year were recognized, including Sasha Planinsic ’21, Xavier Moskala ’20, and Alexandra Rudock ’19. Salutatorian for the senior class is Jennifer Falgione, and this year co-valedictorians are Emily Halbedl and Alexis Moskala.

Alexis Moskala was awarded the Spirit of Caring Award, given to the senior with the most service hours recorded over four years. Alexis completed over 870 hours of service during her four years at OLSH.

The top Scholar-Athletes for the year were Emily Habedl ’18 and Xavier Moskala ’20. These students had the highest academic averages among the student-athletes at OLSH. OLSH’s Most Valuable Athletes for the Year are selected by the OLSH head coaches. Haley Hamilton ’20 was selected for the second year in a row for her contributions to the Cross Country, Girls Basketball, and Track & Field teams. Christopher Kocent ’18 was selected for his contributions to the Cross Country and Track & Field teams.

Several OLSH scholarships were also awarded. The Alison & Katie Michel Memorial Scholarship, which is given to a senior in memory of Alison ’96 and Katie ’03 Michel, was awarded to Celeste Kristek ’18. The Susan P. Fahey Memorial Scholarship, which was established in honor of a beloved OLSH Spanish teacher and is given to a student who has demonstrated a love for the study of a world language, was awarded to Corinne McDevitt ’19. The newly established John A. Mihaloew Endowed Scholarship was awarded for the first time to Dominic Cook ’19. This scholarship was created in honor of teacher John A. Mihaloew and is given to a student who demonstrates “outside the box” thinking.

For a complete listing of Honors Convocation awards, please download the pdf below.