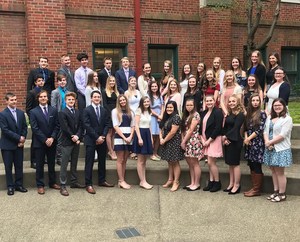 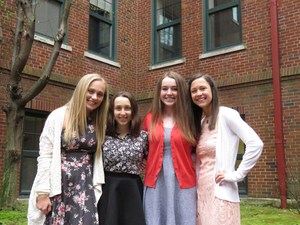 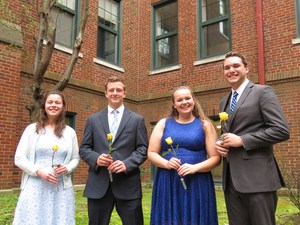 Each spring, the OLSH chapter of the National Honor Society (NHS) holds an induction ceremony and Mass to welcome new members, recognize graduating seniors, and celebrate the four pillars of the organization. On Sunday, April 29, students, parents, faculty, and administration gathered in the OLSH Chapel for this annual event. After celebrating Mass together, school president Terry O'Rourke Donoghue delivered remarks with those in attendance. She shared with the group some of the history of the National Honor Society organization and discussed the Society’s motto of “noblesse oblige” which translates to “nobility obligates.” Addressing the students, Mrs. Donoghue called upon the NHS members “to consider your obligation very seriously -- to act honorably, generously and responsibly -- in a fashion that conforms to your position, as well as with the reputation the National Honor Society organization has earned.”

As has become tradition, each of the outgoing NHS officers shared a reflection on one of the four pillars. Alexis Moskala reflected on Scholarship, Emily Halbedl on Leadership, Christina Trocchio reflected on Character, and Jennie Falgione reflected on Service. These four senior officers also passed their responsibilities on to the newly elected officers, symbolized by the passing of a yellow rose. New officers elected include Ryan Parker, president; Julia Sarnowski, vice president; Rebecca Voss, secretary; and Luke Saftner, treasurer.

This year 37 sophomores and juniors were inducted into the society, after meeting academic eligibility requirements and completing an application and interview demonstrating their leadership, character, and service. These students joined 30 returning members in the group that recognizes the top students in the school. The 19 graduating seniors of the group received stoles that they will wear with their graduation regalia.

At OLSH, NHS students serve as peer tutors in the OLSH Writing & Learning (OWL) Center and in the after-school tutoring program. The group also keeps a section of Ewing Road clean through the Adopt-a-Highway program. Student members are required to maintain a 3.75 grade point average, complete 50 hours of service (20 of which must be to the school), demonstrate leadership skills in at least one organization, and uphold the four pillars of scholarship, leadership, service, and character. The group is moderated by Spanish teacher Ms. Kelly Mullen and school counselor Mrs. Regina Woynar.