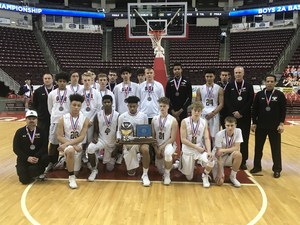 The Chargers ended the 2018 season as state runners up for the first time in school history!

The OLSH boys basketball team made school history on Wednesday, March 27 as they represented OLSH at the PIAA Championship title game for the first time ever. The Chargers are the WPIAL runner-up and beat 2018 WPIAL champ and 2017 PIAA champ Sewickley Academy to earn their trip to Hershey.

The Chargers took an early lead, but the young team struggled a bit in the second half. The boys dug deep and worked hard, but were unable to take back the game from the Constitution Generals, losing 81-71. The team ended an incredible 2018 season as the first OLSH boys basketball team to place 2nd in the state!

Coach Mike Rodriguez has been impressed with his young team this season. The Chargers made history in 2018, but their story as a team has only just begun!