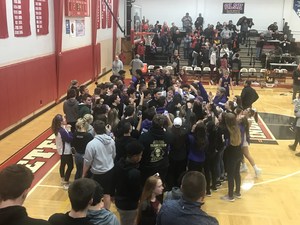 On Tuesday night the Chargers beat section-rival Sewickley Academy for a state championship bid and a trip to Hershey. Fan buses will be available Tuesday as the whole school will take the day to support the team.
It was the fourth match-up of the season and perhaps the game with the highest stakes.  OLSH and SA split in regular season play and the two teams met again in the WPIAL finals. Sewickley took the WPIAL championship and the section rivals were forced to meet again in the PIAA semifinal round on Tuesday night. The game was close the entire night, going into overtime. Victory would go to the OLSH Chargers with the winning basket made by Austin Wigley. Playing without two starters, Donovan Johnson and Tyler Bradley, the team worked together and stand out performances were recorded by Wigley, Ricco Tate, Darren DiMichele, Dante Spadafora and Michael Dugan. Final score was 70-68.
Principal Tim Plocinik has declared Tuesday, March 27 a field trip day for all students, faculty, and staff and fan buses will be provided to Hershey for the 2:00 pm game. Students and parents received information about the buses via email. Please contact the school's main office if you have any further questions about Tuesday's game.
Print