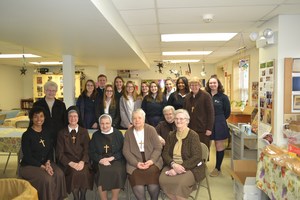 The week began with orientation for the students who signed up as volunteers. First, Brooke Graff, director of McGuire's Adult Training Facility, visited OLSH on Thursday, March 8, in order to share the history and ministry of McGuire Memorial with the students. On the following day, Theresa Long--a teacher at OLSH who has been closely involved with the Mooncrest ministry--spoke to the student volunteers about the Mooncrest Neighborhood Programs.

Students joined sisters from Our Lady of the Sacred Heart Convent to help with homework and crafts at Mooncrest on Monday, March 11. Theresa Long demonstrated how to create springtime paper flowers using buttons, floral wire, and recycled book pages. She told the children that these flowers would be turned into a bouquet to help decorate the chapel on the day of the funeral for SM René Procopio, long-time director of the After School Program.

Many of the children made several flowers in order to add to the bouquet, but some of the kindergarteners were a little more reluctant to relinquish their masterpieces. Sister Desiré said that, "Despite the usual antics of elementary and middle school children, the students and sisters from OLSH seemed to enjoy themselves very much. The craft was a great idea, and really helped connect everyone.

On Tuesday, March 12, 20 students from OLSH teamed up with six sisters from Our Lady of Hope Provincial House in Beaver Falls to volunteer their time at McGuire Memorial.

Jeff Hulbert, mission leader at OLSH, accompanied the group and drove the van of guys over while Sister Desiré drove the van of girls. At McGuire, the students and sisters divided into groups. They helped in various areas and learned how to work closely with McGuire's "Entrusted Treasures.

One group worked on a project in the green house, where they were greeted by the resident menace - Francis, a Chinese golden pheasant, who likes to think he's in charge. Another group helped wheel residents over to an area of the multipurpose room where they did some baking together.

Several different sports activities involved both students and residents, including bowling, games on the Wii, basketball, and ring toss.

Staff commented on how exceptional the students were in interacting with the residents. Jeff Hulbert said, "It was great to see the OLSH kids building relationships with people they had never met. We cannot thank Sister Thaddeus enough for allowing us the opportunity to spend time with these amazing people. It was tough not to get emotional when we had to return to school. Our OLSH students are looking forward to doing more with the sisters as well as with McGuire Memorial."

Father Michael Greb, OFM, Cap., chaplain, celebrated the Eucharistic liturgy and expressed appreciation to the sisters for their vocations and lives of service.

Followng dinner, several students shared their experiences from the week. Jeff Hulbert also thanked the sisters for sharing their mission and values with the school.

"It was a full week, and one that took a lot of planning," but Sister Desiré said she would do it again. She continued, "I keep getting all the thanks, but I only did my share of the work. It took a whole team of very dedicated and enthusiastic individuals to pull this off. I couldn't have done it without the volunteers, and all the support and advice I received. I am blown away by the generous spirit of my sisters and the people with whom we work and minister."