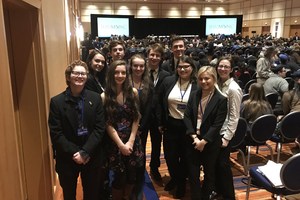 On February 8, ten OLSH students, under the direction of OLSH social studies department chair and Model UN Coordinator Mr. Scott DeVivo, traveled to Baltimore to attend the Johns Hopkins University Model United Nations Conference (JHUMUNC).  JHUMUNC is an authentic simulation of the United Nations, which introduces students to the world of diplomacy, negotiation, and decision making.

At Model UN, students step into the shoes of ambassadors of countries that are members of the UN. OLSH students represented Panama and spent four days with over 1,800 other students from around the world preparing draft resolutions, plotting strategies, negotiating with supporters and adversaries, resolving conflicts, and navigating the UN’s rules of procedure – all in the interest of resolving problems that affect the world.  Issues at this year’s JHUMUNC included stopping a deadly pandemic, eliminating transnational crime, and protecting cyberspace rights and cybersecurity.

Mr. DeVivo has been the Model UN coordinator at OLSH for the past three years. He said that the part of the experience that probably had the most impact on the students was the challenge of having to work with a dynamically varied group of their peers. “Our students had to argue, negotiate, and plan with students from different types of schools and backgrounds from all over the country and all over the world,” he said. Through their participation in this program, students acquire valuable skills that will help them not only improve as students, but also as active and responsible citizens of the world.