OLSH Students Participate in March for Life in Washington, DC 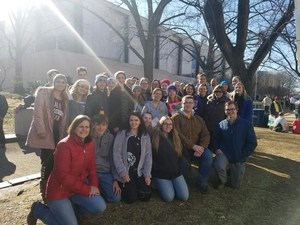 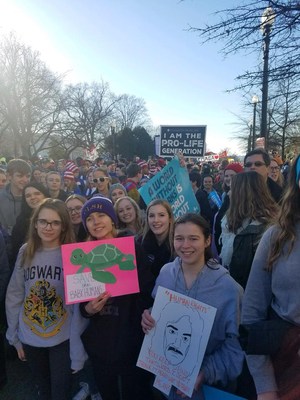 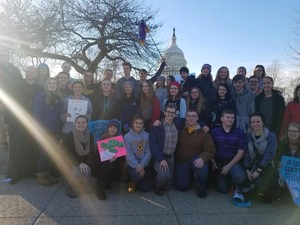 Each year, OLSH is represented by students, faculty and staff at the March for Life in Washington, DC, and this year was no exception.

Each year, OLSH is represented by students, faculty and staff at the March for Life in Washington, DC, and this year was no exception.  Though the group of about 35 students and 5 adults arrived in DC later than expected, due to a broken-down bus, and arrived back at OLSH much later than expected, due to the breakdown of the replacement bus and a dinner of Dominoes Pizza delivered to the side of the highway, the trip was a positive experience for all involved.

The group began their trip with an early morning Mass in the OLSH Chapel, then set off to join the world’s largest annual pro-life demonstration. The theme of this year’s March for Life was Love Saves Lives, a sentiment which fits well with the Felician Core Value of Respect for Human Dignity.

Under the guidance of Ms. Kate Kelly, moderator of the Pro-Life activity, the students began preparations for this trip in December with their sponsorship of Respect Life Week. During this week, students encouraged their peers to sign up for the March for Life and ran a bake sale and family movie night to raise money to help defray the cost of the trip.  They also organized a Day of Silence, during which participants took a vow of silence in an act of solidarity with the unborn children who have no voice of their own.

The March for Life provided our students the opportunity to take an active role as we work to bring about change. It also showed them that today’s youth can have a powerful impact when they stand together for their beliefs. Overall, despite the hiccups in their travel plans, it was a memorable and meaningful trip for all involved.