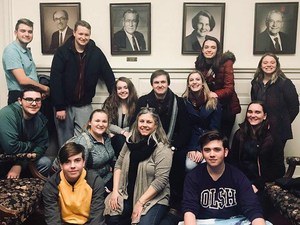 The OLSH drama team’s performance of Pullman Car Hiawatha earned them 3rd place in the state at the PHSSL Drama Festival.

On January 5 & 6, 2018, a group of OLSH students, under the direction of Ms. Dolores Manuel, competed in the PHSSL (Pennsylvania High School Speech League) State Drama Festival at Bloomsburg University. This is the 2nd year that OLSH has earned a spot at the state competition, and the cast and crew did not disappoint.

The OLSH drama team’s performance of Pullman Car Hiawatha, a one act play by Thornton Wilder, earned them 3rd place in the state, and junior Sophia Blake was of 8 students named to the All-State Cast.

Director Dolores Manuel said, "We were the last school to perform in the competition. The students had the opportunity to watch top ranked schools from all of Pennsylvania. Some shows were so well directed and acted that you forgot they were high school students. They could easily have been college theatre or professional performances. Our students rose to that level, and the depth of character they showed on stage was incredible. They were so focused, so believable in their roles, that I forgot I was watching students."

When asked about the experience, junior Alyssa Brinza said, “Traveling to Bloomsburg and performing in this competition has really helped me grow as a person and an actress. I learned how to quickly change blocking and to adapt to the surroundings I'm handed.”

Senior Alexis Moskala agreed with that sentiment, saying, “The whole competition gave me a newfound appreciation for theater and the arts. It meant a lot to me to be able to see other schools perform and to watch other students who are just as passionate about theater as I am.” She credits their director with the success of the OLSH theatre program, saying, “The whole cast would agree that we could not have gotten this far without the help of Ms. Manuel, who gives her time and expertise to help us cultivate our talents and passion for theater.”

The next production for the OLSH Theatre Department will be their spring musical, Beauty and the Beast. Performances will be held March 2, 3, 4, 9, & 10 in the OLSH Auditorium.