A Great Time to Be a Charger! 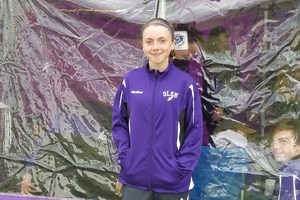 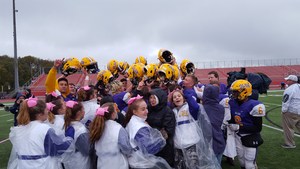 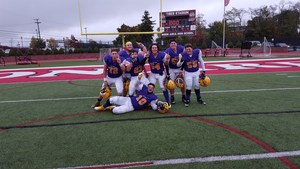 This weekend's sports ventures resulted in OLSH history being made with a cross country WPIAL Champion and a football conference title.
The fall sports season at OLSH has been quite successful with the girls and boys soccer, girls volleyball, and football teams making playoffs.  Two teams made history this weekend with their successes - cross country and football!
On Thursday, October 26 cross country held its annual WPIAL championship meet.  Runners compete as a team and individually.  Unfortunately, the boys team missed qualifying to the state meet by one place, but the girls team took 3rd and will run at the PIAA championship meet this weekend in Hershey.
Sophomore Haley Hamilton made school history by taking first place in the girls Class A race with a time of 19:03. She is the school's first individual WPIAL Champion in cross country!  She will lead the girls team this weekend at the state meet.
Chargers football played the last game of the regular season at Sto-Rox on Saturday, October 28. The team's 56-14 win earned them the title of Big Seven Conference champs - a first in the history of the football program!  The team will have a home field advantage in the first round of playoffs, with pairing coming out later today.
Girls volleyball is continuing their playoff run with the quarterfinal game against Geibel at Baldwin High School tomorrow, Tuesday, October 31 at 7:30 pm.
Junior Katherine Marks, WPIAL girls tennis runner-up, will play for the PIAA girls singles tennis championship this weekend, as well.
Go Chargers!
Visit www.olshchargers.org to stay up to date with all OLSH athletics news and information!
Published October 30, 2017