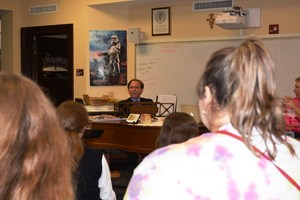 On Thursday, September 28, the OLSH Concert Choir had the opportunity to perform for a special guest, Diego Delvalle, an opera singer, musician, and actor from Paraguay.

On Thursday, September 28, the OLSH Concert Choir had the opportunity to perform for a special guest, Diego Delvalle, an opera singer, musician, and actor from Paraguay. After listening to the choir’s performance, Delvalle answered questions from the students about his training, background, and experiences in opera.

Delvalle first came to the United States this year as a participant in the Program for Young Artists at Pittsburgh Festival Opera, where he was invited to perform “Don Basilio”- Cover (“Le Nozze di Figaro”), Nurse (the world premiere of “A Gathering of Sons”), and Vocal Ensemble (“Xerxes”). He began his musical training on the piano at the age 6. By the time he was 18, he had earned the title of “Profesor Superior de Piano.” Throughout his life, he pursued singing and acting and became proficient on multiple instruments, including the violin, trombone, and tenor sax.

In 2004, Delvalle joined the Opera Company of “Universidad del Norte”, where he performed in the choir and featured roles, and also worked as a rehearsal pianist. In 2015, Delvalle graduated from “El Estudio del Centro de Investigación y Divulgación Teatral” (The Study of the Center for Dissemination and Theatrical Research) as professional actor. He also has experience working as a stage manager, director, and composer, having recently written the libretto and composed the music for a children's play which will be produced by “Instituto MAINUMBY” in Pilar, at the end of 2017.

Delvalle treated Mr. Pontiere and the Choir to a mini performance, playing the piano and singing a piece from a Paraguayan opera. He was also very complimentary of the OLSH Choir and the difficulty of the music in their repertoire.

OLSH is grateful to Mr. Delvalle for taking the time to visit our school and to Mrs. Norma Rozman, who was instrumental in bringing Delvalle to OLSH.