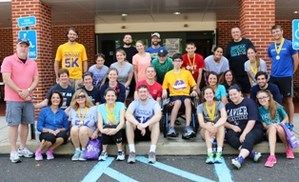 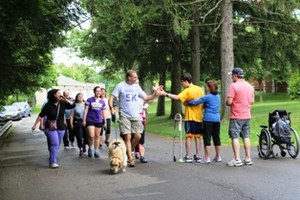 Runners and walkers of all ages came to OLSH on Saturday, June 10, for the annual Rally for McNally Endowed Scholarship 5K!

Runners and walkers of all ages came to OLSH on Saturday for the annual Rally for McNally Endowed Scholarship 5K! The event raised dollars for the McNally Endowed Scholarship Fund, an endowed scholarship that was established in honor of 2007 OLSH graduate Michael McNally. Michael was hit from behind while riding his bike while in college and has spent the last several years recovering from his traumatic brain injury. He is an inspiring young man who was involved with OLSH Cross Country as a student. This is the second year for the event, and thanks to the generosity of an alumni family, all dollars raised at this year's event were matched! This year, with the match, the event raised over $10,200! This total will allow the scholarship to be fully endowed, with its first distribution for the 2018-2019 school year. Alumni, current students and parents, former coaches, and friends came together to honor Michael.

Event committee chair Jordan Hinds '02 thanks sponsors Rohrich Automotive Group, Ohio Valley Hospital, and Pierogies Plus for their generosity. Top runner for the males was 15-year old Lukas Dunaway, and top runner for the females was Katie Purcell '02. Thanks to all who supported the event, especially the Moon Township Police and the OLSH cross country and track coaches and teams!