Graduation for the OLSH Class of 2022 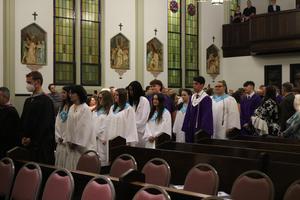 OLSH celebrated the class of 2022 with the annual Baccalaureate Mass and Commencement Exercises back on the OLSH campus this year.

The OLSH graduation ceremony returned to OLSH after a two-year shift off-campus due to the pandemic. The graduates and their families attended the Baccalaureate Mass in the OLSH Chapel on Thursday, June 2, celebrating one final Mass together as a class. On Sunday, June 5, the 88th OLSH Commencement Ceremony was celebrated in the Angela Activities Center.

During the ceremony, guests heard from four different student speakers. Luke Daeschner, class president, gave a farewell speech encouraging his classmates to remember that their foundation in faith and values from OLSH. Salutatorian RJ Ruckert commented on the challenges he and his classmates have faced and urged them to consider the words pride, commitment, and excellence (the words printed on the baseball team’s shirts), as they continue on their journeys. Frank Smigiel, also a Salutatorian this year, talked about perseverance in his remarks and he challenged his classmates to consider what they have learned from OLSH. Michael Urban, Valedictorian, concluded his speech with, “I challenge you, the Class of 2022, to be the spark that will make this world a better place. It doesn’t matter what you are going through, because you are the one who decides how to take the next step, to grow or to wilt. I pray you will grow.”

The audience then enjoyed two songs performed by the OLSH Concert Choir. Principal Tim Plocinik shared his remarks, inviting the graduates to “persevere through the challenges that you’ll face, that you’ll do so with a strength of character, using the values of the Felician sisters as your guide.”

After the distribution of diplomas, Mrs. Regina Woynar ’95, school counselor and parent of a graduating senior, gave the alumni welcome. She shared some wisdom with the graduates and reminded them that they will always have a home at OLSH.

The OLSH Class of 2022 came to OLSH from 29 zip codes and 14 members of the class previously attended Quigley Catholic High School which closed in 2019. The Class included eight Legacy Students who had at least one parent graduate from OLSH. These students will attend 40 colleges, universities, and other post-secondary institutions in ten states and they earned over $14,637,746 in documented scholarships and grant offers. 45% of the class of 2022 will go on to study a STEM or medical-related field, four will study education, 21 will pursue a liberal arts major, 15 will study business, two will study arts, three are undecided, one will pursue a trade, and two plan to enter the work force. 13 student-athletes plan to play sports at the collegiate level.

To view the Commencement or Baccalaureate Livestream, click here.

You can read the Commencement Program, which includes awards and honors earned by the Class of 2022, as well as their future plans, below.