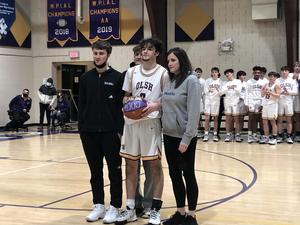 With just over 30 seconds remaining in the first half of last night’s basketball game against Southside Area, Jake DiMichele ‘22 sunk a basket and the crowd went wild. Of course, the crowd had been cheering him on all night, but this particular basket was special, as it marked Jake’s 2000th career point in an OLSH uniform. Immediately after reaching this milestone, the game was paused and Jake was joined on the court by his parents and older brother, Daren ‘19, a former Charger who also saw great success on the basketball team. Jake was presented with a specially painted basketball to commemorate the moment.

Jake finished the night with 29 points in the Chargers’ 78-38 victory over the Rams. He is just the 31st player in WPIAL history to score 2,000 points in his career, and is the all-time points scorer at OLSH!