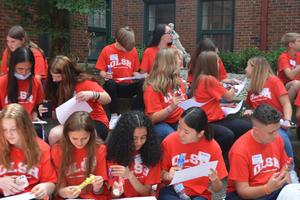 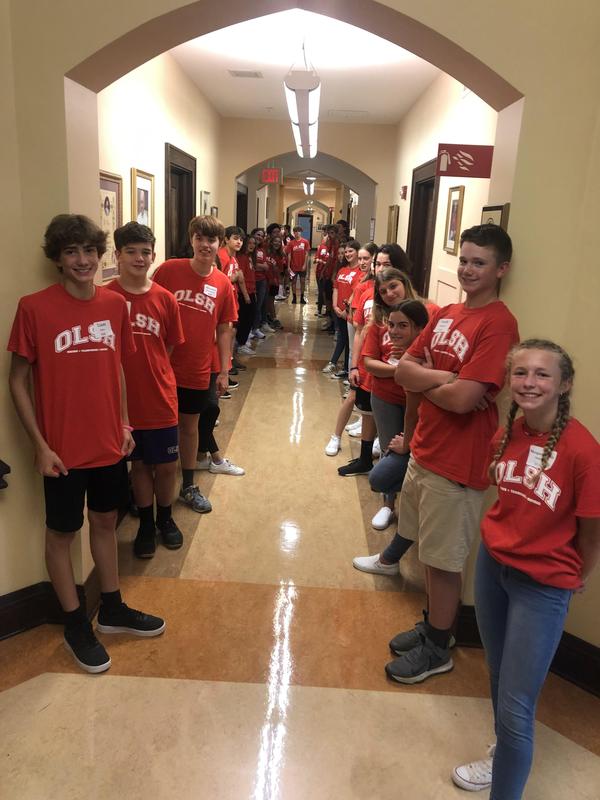 OLSH hosted Freshman Foundations Day on Sunday to welcome a brand new class of Chargers and to kick-off the new school year. This annual tradition has become a fun way to acquaint our incoming freshman class with OLSH and to prepare them for their high school journey.

Sunday’s annual Freshman Foundations Day was the perfect way to begin the 2021-2022 school year. The OLSH Admissions office worked with faculty, staff, and Student Ambassadors to organize and run the day’s festivities. Incoming freshmen began their day in the morning at the Angela Activities Center, splitting up into groups to participate in icebreakers and team building activities. The freshmen showed off their competitive and outgoing natures, participating in musical chairs, a scavenger hunt, “Getting to Know You BINGO,” and a lip sync battle. Student Ambassadors and members of the Character Alliance taught our new students the ins and outs of OLSH by sharing freshman survival tips and performing a skit on how to properly wear the school uniform. Freshmen even learned the OLSH Alma Mater in preparation for their Matriculation Ceremony later that day and wrote letters to their future selves that they’ll read at their senior retreat in four years as a reminder of how far they’ve come.

Families were invited to join the freshmen for Mass in the OLSH chapel after their orientation activities concluded. The Mass and Matriculation ceremony served to formally welcome the class of 85 freshmen – the largest in five years – into the OLSH family. Each student received a Blessed Mary Angela medal, consecrated by OLSH chaplain, Fr. Bill Dorner.

Following Mass was a picnic dinner for everyone in attendance. Students and their families enjoyed the opportunity to get to know one another better and to begin form long-lasting friendships before their classes officially begin later this week.

We are incredibly grateful to have so many new Chargers joining the OLSH community and wish them the best of luck on their freshman year!