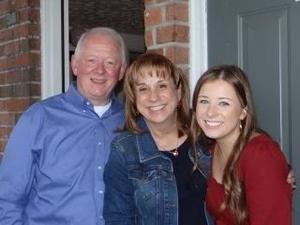 OLSH Business Manager Cathy Neubert has been an important part of the OLSH community since 2007. She loves the OLSH family and the opportunity to get to know the students by attending musicals and sporting events.

It did not take OLSH Business Manager Cathy Neubert long after starting at OLSH to realize that she was in a special place. While moving from for-profit to non-profit business work was a culture shock, Cathy knew that her decision to change her career path was for the better.


After graduating from Robert Morris University in 1984 with a degree in Business Management with a concentration in Accounting, Cathy worked as an assistant controller for Rohrich Automotive Group for 19 years, followed by 3 years working at Bobby Rahal BMW.


After 22 years in the automotive industry, Cathy was hoping for a clear sign to leave her current position as she was feeling overwhelmed and ready for a change.


“I felt that I was missing out on my daughter growing up since I was working so much when she was off from school. I knew something needed to change. I wanted to be a better working mom,” Cathy said.


Little did she know that a rainy Halloween night and a call from a friend would be the push she needed to take the leap of faith.


“I remember taking Lauren trick-or-treating in the rain and just feeling so overwhelmed,” Cathy said. “But a friend of mine called me that night about a business job opening at OLSH and I knew that was my sign. After interviewing with Sr. Francine for the position, I felt a connection and I knew that OLSH was the place for me.”


When she started in the business department in January 2007, Cathy found the atmosphere very different from her previous experience.


“My first six months on the job were challenging because I never knew what was coming next for the school. It felt like a blur,” Cathy said. “I learned a lot on my own and relied on help from my colleagues.”


Cathy is thankful to have such a strong support system still today by working with people she can call friends.


“It really is a family here. I get along great with my colleagues and consider them good friends. There are a lot of very smart and good people that work here,” Cathy said. “It is also special to have the support of the Sisters. They are wonderful women with great sense of humor!”


Cathy has grown to love the culture of OLSH and her role as business administrator as she works directly with prospective and current families.

“It is so rewarding to help families with the financial aid process,” Cathay said. “To know that we make a difference for so many people is really special.”


She has also seen many changes to the school over the years that have helped improve internal operations.


“OLSH is a lot stronger now and we are more business-oriented behind the scenes. We have made a lot of changes for the better that have helped with procedures such as hiring a full advancement team, moving to the president-principal model, and adapting more efficient technology. I am really proud of that growth,” Cathy said.


According to Cathy, her husband Dan is “the flip to her flop” and the couple has been married for 32 years. They have a 24-year-old daughter, Lauren, who recently earned her master’s in Exercise Science.


“I am so proud of my daughter,” Cathy said. “It is every parent's dream to see their kids succeed and find a job that they love.”


Cathy and her family are close with her four brothers and Dan’s four sisters and all their children. She loves old movies, musicals, and working out at the gym before coming in to work every day.


For Cathy, the best part about working at OLSH is being a part of a caring community of students, faculty, and staff.


“I love seeing the students fill the school and being able to attend their musicals and sporting events,” Cathy said. “I love the feeling of this place - it’s like stepping into another world. I’m not sure if it’s like that anywhere else, but OLSH is just a great place to be.”