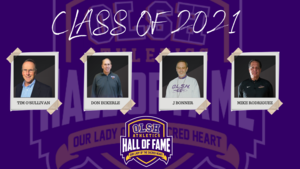 The OLSH Athletic Hall of Fame has been recognizing outstanding contributions to OLSH Athletics since 2002. This year's inductees have provided a combined 75+ years of service to OLSH.

Our Lady of the Sacred Heart High School (OLSH) will induct four new members into its Athletic Hall of Fame at a ceremony in July. The following will be recognized:

J Bonner coached at OLSH for 13 years, leading both the Cross Country (1998-2010) and Track and Field (1999-2011) teams. J was instrumental in founding the OLSH Track and Field team, and gave OLSH student-athletes the opportunity to compete at the WPIAL and PIAA levels. Bonner coached the first individual State Champion in school history, Katie Purcell, in the 3200 meter run. Purcell also won the WPIAL Championship that same year in the 1600 and 3200. J coached multiple qualifiers for the state cross country championships, as well as multiple events in track and field, and is the parent of two OLSH alumni.

Don Eckerle has spent the past 18 seasons as the head coach of the OLSH Girls Basketball team, leading the Chargers to the program’s first-ever WPIAL Championship appearance in 2008, and its first title in 2019. The program has made the playoffs in 17 straight seasons, only missing out on the postseason in Eckerle’s first year. The team's other great successes under Eckerle’s leadership included 8 section titles and an impressive 332-121 record. Don was named Beaver County Times Coach of the Year in 2017, is the parent of two OLSH alumni, and will now add OLSH Athletics Hall of Famer to his long list of accomplishments.

Tim O’Sullivan has been involved with OLSH for over 30 years, through his role of Director of the Maronda Foundation and his oversight of the Youthtowne athletic complex. Tim was instrumental in providing a place for OLSH boys and girls soccer, baseball, softball, cross country, and football to practice and compete. Tim continues to work closely with the athletic department for game and practice schedules. He has also served on the OLSH Board of Directors, has led 7 World Youth Day pilgrimages, and is the parent of four OLSH alumni. In 2014 Tim received the OLSH Legacy Award for his commitment and support for the advancement of OLSH and its mission.

Mike Rodriguez just completed his 13th year as head coach of the OLSH Boys Basketball program and has taken the program to heights never seen before. He led the team to WPIAL Championship titles in 2019 and 2020, and a third straight WPIAL title, a perfect 24-0 record, and the school’s first ever team PIAA State Championship this year. Coach Rod is the two-time reigning 2A Pennsylvania Coach of the Year, and three-time WPIAL 2A Coach of the Year. Mike’s induction marks the end of a ‘banner year’ for the OLSH boys’ basketball program.

The 2012 WPIAL Champion OLSH Boys Cross Country Team and the 2005 WPIBL Champion OLSH Girls Bowling Team will also be recognized at the event in July, which will be held at the school. Event details, including the opportunity to purchase tickets will be available soon.