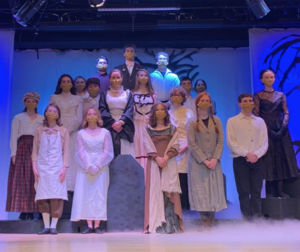 Congratulations to the cast and crew of the OLSH Theatre production of The Spoon River Project for placing second in the PA High School Speech League State Drama Festival!

The OLSH Theatre Department was awarded second place for their performance of The Spoon River Project in the 2021 PA High School Speech League (PHSSL) Drama Festival. OLSH has seen success in participating in the festival the past five years; this year was their highest placement yet.

There were 7 total plays in this year's tournament. The OLSH Theatre cast of 19 students (18 performers and one student stage manager) performed The Spoon River Project, adapted by Tom Andolora.


The play is based on Edgar Lee Masters' Spoon River Anthology, as it tells the stories of residents of a small town called Spoon River as they reflect on their own dreams and regrets.


Andolora had the opportunity to view OLSH’s production of his play and commented that "it was a really wonderful production of a difficult play for high school.”

The PHSSL Drama Festival has been organized every year since 1963, but this year was the first to go entirely virtual. Participants from schools throughout Pennsylvania submitted videos of their performances that were judged by theater professionals and educators from across the state.

The OLSH cast received very positive feedback on their scoring ballots from the judges.


“An excellent performance. Beautifully done. The acting was excellent and characters were believable,” commented another.


Not only did the judges give high praise to The Spoon River Project as a whole, Andy Besong ‘21 and Ellie Troiani ‘21 were chosen among the top 7 performers of the competition to be named to the PHSSL All State Cast.

Congratulations to the entire cast of The Spoon River Project!