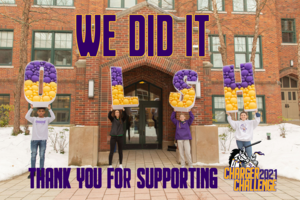 The Charger Challenge fundraising campaign brought together students, parents, staff, alumni, and friends of OLSH and raised over $100,000 for The OLSH Fund!

Our Lady of the Sacred Heart High School set out on a lofty quest to raise $100,000 over the course of the first 11 days in February via an online campaign, but the Chargers rose to the Challenge.

The goal of the online giving campaign, “Charger Challenge,” was to replace the funds that would have typically been raised by the school’s annual Gala, cancelled this year due to the pandemic. OLSH decided to re-envision a letter-writing initiative by the same name that took place annually from the mid-nineties through 2010.

The new Charger Challenge also involved students reaching out to family and friends asking for support of OLSH, but this time through email, text messages and social media. Students engaged in friendly competition between their fellow classmates for prizes such as Apple AirPods. The classes also banded together in hopes of winning a food truck party by raising the most money as a collective class. The class fundraising competition was so close that both the sophomore class of 2023 and the freshmen class of 2024 won the prize of the food truck party by raising $24,850 and $23,608, respectively. The other classes proved to be equally strong competitors as the senior class of 2021 raised $17,720 and the junior class of 2022 raised $12,935.

The campaign’s launch coincided with Catholic Schools Week which was a great way to celebrate Catholic education and philanthropy. The OLSH community came together to participate in the event through fun, friendly competition and programs. OLSH hosted an 8-hour webathon streamed live from the AAC. The webathon featured students competing in a live game of Charger Feud,” student-made videos, quotes from families and alumni about what OLSH means to them, as well as clips from athletics, musicals, and other OLSH events all hosted by Matt Farago and Cheryl Karashin from the Advancement Office. Some lucky students even had the chance to throw water balloons at principal Tim Plocinik who braved the cold for the fundraiser!

The Charger Challenge was a huge success, raising $122,533 to date, with gifts still trickling in! The online team of OLSH Alumni raised $23,485 and the OLSH Family and Friends Team raised $11, 825, which shows the long-standing dedication to the school. The Advancement Team was overwhelmed by the results of the campaign. "I was blown away by the community’s generosity,” shared Karashin, VP for Advancement.  “The funds raised directly impact our students, and knowing that our OLSH community came together to enhance our current students' experience is humbling.”

OLSH is especially grateful for our lead sponsors for their generous support of Catholic higher education: The Collier Family, The Pittsburgh Dispatch Service, Inc., and the Felician Sisters of North America. OLSH would also like to thank our general sponsors for making this event such a success: The Santelli Family, Felician Services, Inc., and OLSH Gear by PeakPgh.