Welcoming the OLSH Class of 2024 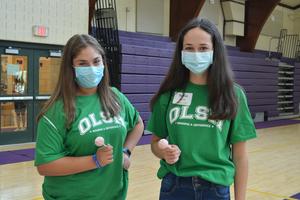 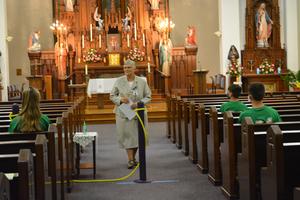 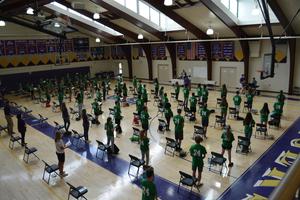 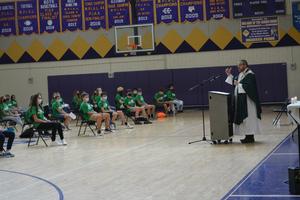 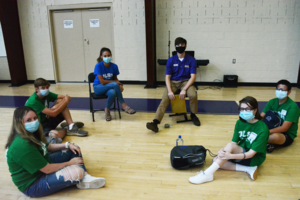 OLSH’s annual Freshman Foundations Day was held on August 23 in advance of the start of school to introduce the newest class of students to the school and their classmates! The day culminated with Mass and a Matriculation Ceremony.

OLSH welcomed the Class of 2024 to the annual Freshman Foundations Day on Sunday, August 23, 2020.  OLSH President, Terry Donoghue, remarked, “It warmed our hearts to welcome the class of 2024 to campus, and it was a great blessing to attend Mass with them at the conclusion of the program.  We are so happy that these students are part of our OLSH family!”

The event was coordinated by Mrs. Jessica Sellman ‘02, Director of Admissions and Enrollment, and Mrs. Renee Price, Enrollment and Events Manager.  The new freshmen class of 70 students is comprised of representatives of over 26 different schools and 25 school districts.  The students come from Catholic, public, private, cyber, charter and home schools.  Mrs. Sellman noted that from a geographical standpoint, it is the most diverse class OLSH has had in some time.  She noted that a few of the freshmen had moved here from out of state.  Additionally, five of them are Legacy students - their parents are OLSH alumni.

The students were divided into smaller groups and rotated through faculty-led presentations.  Mr. Jeff Hulbert spoke on the topic of Mission and Sr. M. Francine Horos provided a talk on Blessed Mother Angela and the history of the OLSH chapel. Mrs. Maureen Steuernagel, Mrs. Darcy Pihlblad, and the Character Alliance presented the IALAC (I Am Lovable and Capable) skit, the acronym having been created by the late Sr. Louise Marie Olsofka, a Felician sister and former OLSH teacher.

The faculty and staff were assisted by the OLSH Student Ambassadors.  Approximately 30 ambassadors volunteered their time to lead activities such as ice breakers and a scavenger hunt.

The culmination of the day was a Matriculation Ceremony and Mass led by OLSH Chaplain, Fr. Bill Dorner.  Representatives of the class proclaimed the readings and the Mass was live streamed with over 85 viewers tuning in to watch.  Campus Minister, Mrs. Caitlin Snatchko ‘10, and Music Director, Mr. Rusty Pontiere assisted in the celebration of the Mass.  Matthew McDevitt ’23 was the accompanist and James Benke ’21 and Gabriella Troiani ’21 served as cantors.  Following Mass, Mrs. Donoghue and Principal Tim Plocinik presented each freshman with a Blessed Angela Medal.

Mrs. Sellman said, “In a year marked by so much change, many parents were looking for a different high school experience for their children.  They sought a school with strong academics inside and outside of the physical classroom.”  She believes OLSH’s response to the pandemic in getting online classes up and running so quickly this past March reflects highly on the quality and dedication of the school’s administration, faculty, and staff.

In the words of Blessed Angela, foundress of the Felician Sisters, “A community spirit does not just happen of itself.  It flows from people who share a common tradition and strive for a common goal outside themselves.”

We welcome the Class of 2024 to Our Lady of the Sacred Heart High School and we look forward to watching their transformation over the next four years.