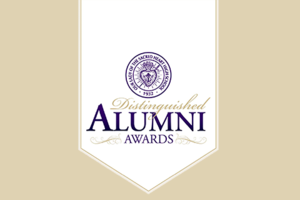 Congratulations to the fourth annual class of honorees (and the 7th annual Alumnus with Heart)! These outstanding graduates of OLSH are living out our mission in their personal and professional lives and we are so proud of them!

The OLSH Distinguished Alumni Awards seek to recognize graduates of the school who have achieved outstanding personal accomplishments, and serve as positive role models for the current generation of OLSH students. These individuals have made great contributions to the community and to their professions, and have gained unique distinction among their peers. We are proud to count them among our esteemed alumni and we look forward to celebrating them at the Distinguished Alumni Awards Ceremony in the Fall.

Christian Leadership: Honors an OLSH alumnus who has distinguished themselves as a leader in community service, devotion to faith, and/or philanthropic efforts.

Dan Gallagher is a Religion teacher and Assistant Campus Minister at Central Catholic High School in Pittsburgh, where he has initiated an honors course on living the virtues and the sacramental life of the Church, organizes retreats and mission trips, and assists with an after school volunteer program. Dan is also the Executive Director and co-founder of Move a Mountain Missions, an organization that provides high school and college students with opportunities to participate in international mission trips to serve the Mustard Seed communities in Kingston, Jamaica.

Dan holds several degrees, including a Bachelor of Sacred Theology from Pontifical Gregorian University in Rome, Italy. He is an active member of St. Raphael parish, working in youth ministry, religious education, RCIA, and marriage preparation. Dan and his wife, Christina, have 3 children and are expecting their fourth this winter.

Alumnus with Heart: Honors an OLSH alumnus who exemplifies one or more of the Felician Core Values and maintains a strong connection to OLSH.

Deena Swank is the Director of External Communication for the Felician Sisters of North America. In her role, Deena has increased the Sisters’ donor base, vocation inquiries, and outreach program applicants; developed marketing plans; performed a website redesign; and served as the organization’s official spokesperson. Previously, Deena worked at OLSH in various roles, including as an English teacher for a number of years.

Deena is an active member of Archangel Gabriel Parish, where she serves as a Special Needs Catechetical Instructor and leads the Children’s Liturgy of the Word. She and her husband Steve have two children and regularly attend OLSH events together. She continues to support OLSH and to practice the Felician Core Values.

Young Alumnus: Honors an OLSH alumnus under the age of 35 who has distinguished themselves in professional achievements.

Haley is an anchor and reporter at Fox 13 News in Tampa, Florida. She sets up and conducts interviews, pitches daily story ideas to news managers, and writes and delivers live reports to a viewing audience of nearly 1.9 million people. Haley serves her community by acting as emcee at various community events and speaking to classes at local schools, even recording footage to be shared at OLSH Career Day. Haley was the recipient of the Florida Associated Press Award for Individual Achievement in 2013, and Florida AP Runner-Up in Breaking News, and has received an EMMY nomination in the Breaking News category.

As a journalist, Haley works hard to live out the Felician Core Values on a daily basis. She advocates for the poor and those who struggle, giving them a voice when they need it and showing compassion for what they are going through, seeing the dignity in individuals that she meets so that she may reach them on a more meaningful level.

Professional Excellence: Honors an OLSH alumnus who has distinguished themselves in their profession.

Michael is an associate professor in the department of Chemistry and Physics at the State University of New York at Old Westbury. He earned his Doctor of Philosophy in Physics from Virginia Tech and has had numerous works published in scientific journals and online publications, including Backreaction, New Scientist, and Science Daily. Michael has had three major grants awarded as lead or co-principle investigator, in addition to a number of other minor grants. He is a member of multiple professional associations and has been invited to present at schools and conferences throughout the country.

Michael serves as a faculty representative to the LIU Board of Trustees subcommittee on planning and is an elected member of the Executive Committee of Brooklyn Faculty Senate. He regularly mentors students in their research to help them on their journey to success and has been involved in the planning of several science-related community outreach activities, including public lectures and astronomy viewing nights.

We are immensely proud of this year’s Distinguished Alumni Award honorees! If you know of someone who would be a good fit for one of these awards next year, submit your nomination to alumni@olsh.org.