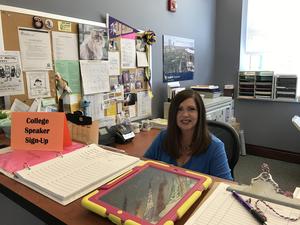 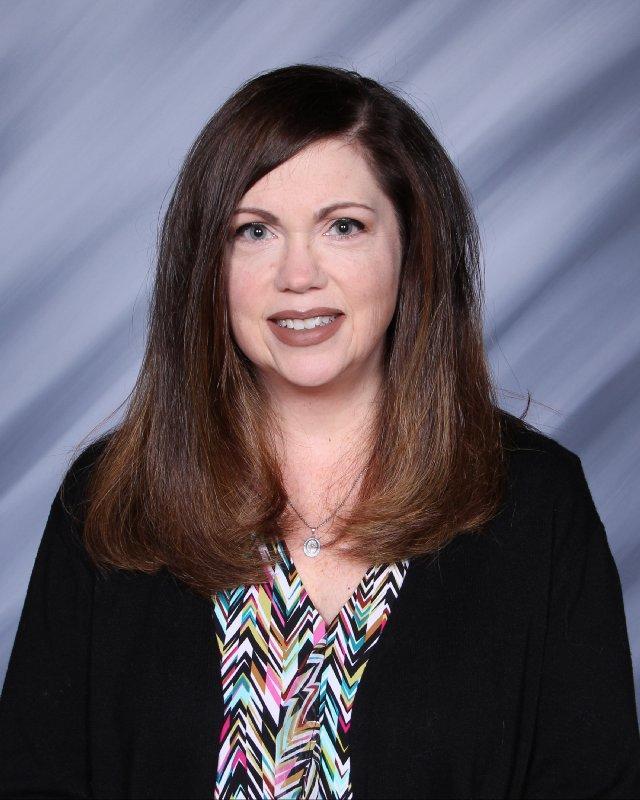 Kelly Pontiere serves as the assistant to both the Counseling and Admissions offices at OLSH. In her role, she has the opportunity to work with students as they are first coming to OLSH, while they consider options for their futures, and as they transition to their next steps in their journeys.

Kelly Pontiere is in her 6th year working as an assistant to both the Counseling and Admissions departments at OLSH.  In general, her time is split 50/50 between the two departments, however certain times of the year are busier for one department or the other.  In mid-November, when transcripts are going out and career day is being held, she is busy supporting the Counseling Department.  In early spring and summer, the Admissions office is busy with activity and becomes her primary focus.

Kelly supports OLSH’s two school counselors, serving as a point of contact and fielding questions from students and their parents.  Kelly also manages the student academic records and imports test scores that are sent out with transcripts.  “We recently starting using a software system called Naviance which connects high schools with colleges,” Kelly said.  “Being able to send transcripts electronically has reduced our time, paper and mailing costs significantly.”  Kelly also verifies alumni education for businesses and colleges in need of that information.  She maintains student activity sheets, tracks scholarships and shares available employment and volunteer activities with the students.

In her Admissions role, Kelly serves as a point of contact for prospective students and their families.  She  manages the records of new and transfer students, and assists with Charger for a Day shadow student visits.  She also helps out with Admissions Events such as Freshman Foundations Day and Open House.

For Kelly, the best part of her job is interacting with the students at OLSH.  “They are extremely well-mannered, well-spoken and well-rounded,” she said.  “The students get involved in diverse activities which distinguishes them from other students beyond their academic achievements”.

Kelly has a strong background working in administrative support positions.  After receiving her BA in English from St. Vincent College, she served as the Executive Assistant for the Pittsburgh Brewing Company which later consolidated as Pittsburgh Food and Beverage.  Next, Kelly moved to Cellular One (later AT&T Wireless) working in External Affairs and then went on to an Executive Assistant position with Sprint PCS.

Following her marriage and the birth of her son Brendan, Kelly chose to stay at home and was out of the full-time workplace for 14 years.  During that time, she pursued her passion as an animal lover by working as an Assistant Trainer at Hollybush Dog Training Services, and later started her own business, SuperDogs, which offered private, in-home training.  Kelly is the proud owner of one dog, two cats, a Pacific parrotlet, a corn snake and two gargoyle geckos.  She also likes to knit and crochet, and is an avid reader.

It was actually Kelly’s husband, OLSH Music Teacher, Rusty Pontiere, who helped bring her to the school   After retiring from the Montour School District, Rusty was looking for substitute teaching opportunities when he came across the open assistant position at OLSH and told Kelly about it.  She applied, got the job and became an employee at the school before he was hired.  It was important to Kelly to find a position that would be fulfilling and provide a greater purpose.  The opportunity to work at a Catholic high school was just the sort of opportunity she was seeking.

Kelly thoroughly enjoys her position at OLSH and looks forward to continuing to support the Counseling and Admissions departments, and to helping students and their families make the transition to OLSH.