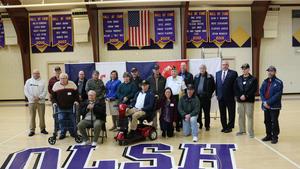 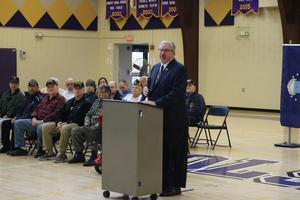 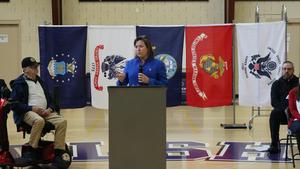 The OLSH school community took a few moments this morning to recognize alumni, family, friends, and neighbors who have served our country. The morning included speakers, an introduction of each veteran present, music, and breakfast. It was a great way for students to better understand the meaning of Veteran's Day.

On Monday morning, OLSH welcomed 18 veterans and active duty military members from the local community to commemorate the 100th Veterans Day. Parents, grandparents, alumni, and friends gathered in the Angela Activities Center for a special ceremony with students before 1st period. Our guests were met with thunderous applause as they processed into the AAC, led by Boy Scout Bernie Komoroski ’22. The school joined in singing the National Anthem with senior Caroline Friend before welcoming the first guest speaker of the morning – Mr. Bob Brasko.

Mr. Brasko is a veteran of the US Navy, having served from 1974-1979. He was stationed at the Bureau of Naval Personnel in Washington, D.C. and was the recipient of the Navy Good Conduct Ribbon and the Navy Achievement Medal. Brasko took the time to reflect on the fact that he is also a veteran of OLSH. He taught history, established & coached the bowling team, and wrote & directed some of the most memorable Christmas Plays. His career at OLSH spanned 22 years before his retirement in 2016. In his speech, Brasko shared memories from his time in the service, making a few jokes along the way. Though he never saw combat, he still felt the importance of giving of himself to serve our country.

Local State Representative Valerie Gaydos was also present to say a few words. Reflecting on the importance of honoring our veterans, she asked each veteran and active duty military member in attendance to pass along the microphone and share their name and where and when they served. They enjoyed the opportunity to learn more about each other and discover some commonalities among the group. After learning more about those in attendance, the OLSH Hall of Honor was announced. The names of alumni who have served or are serving in any branch of the military will be added to the Hall of Honor, placed in the Hall of Social Justice on the first floor of the school. Twenty five people were named to the inaugural class, with the hopes of growing that list as we learn of more alumni who have served or are currently serving in the military.

The school choir closed the ceremony with a wonderful rendition of “God Bless America.” Veterans and a small group of students were then invited to congregate in the cafeteria for a free hot breakfast. The morning served as a powerful reminder of the sacrifices our military members make to serve our country. To all the veterans out there: Thank you for your service!