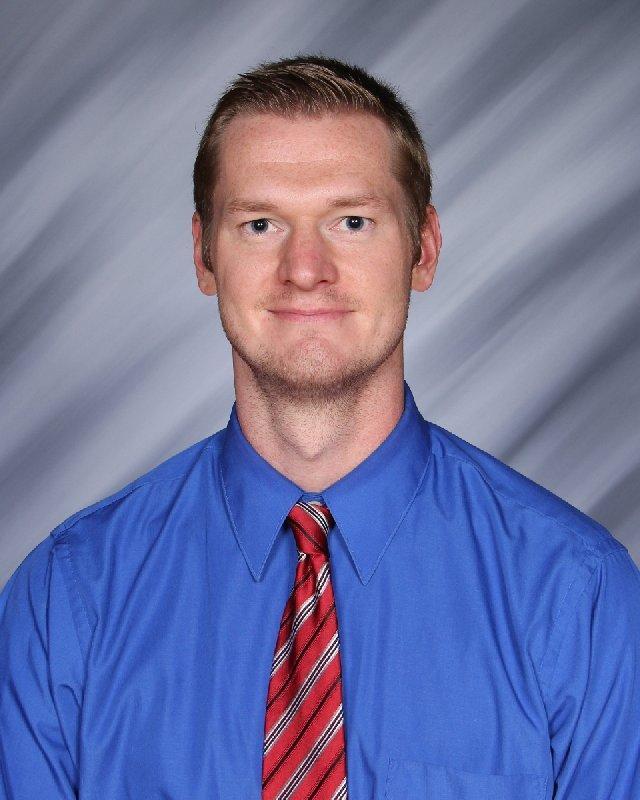 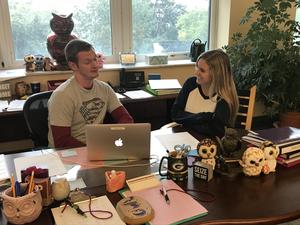 Mr. Tyler Rodgers works as a teacher in the English department and the OLSH Writing & Learning (OWL) Center. He is very involved in student life at OLSH, frequently serving as an emcee for student events or volunteering to appear in WCHR promotional videos or to participate in pep rally activities. Mr. Rodgers leads by example, showing students the value of getting involved.

Tyler Rodgers first came to OLSH as a student teacher in 2013. Upon his graduation from college, he was hired at OLSH and taught classes to seniors for three years.  In 2017, Tyler thought he’d like to explore other job opportunities and accepted a teaching position in Delaware, only to realize that he missed OLSH.  It was during a Chi Rho retreat he attended as a leader, that he felt drawn back to our school.  “I called Mr. Plocinik and told him I would like to return, and I did,” he explained.  “I was excited to be given the opportunity to come back to OLSH, and it was like I had never left.”

Tyler hails from Reading, PA where he attended a small Catholic high school.  In 2009, he came to Pittsburgh to attend Duquesne University where he went on to receive a B.A. in English, a B.S. in Secondary English, and an M.S. in Education.

Currently, Tyler teaches Freshman Honors English, TOIL (Technology Online Information Literacy), and will introduce AP English Literature and Composition.  Tyler also works in the OWL (OLSH Writing and Learning Center) and will serve as its Director this year.  “It is very rewarding to work 1-on-1 with a student and to see them experience that ‘light bulb’ moment when a concept becomes clear,” Tyler remarked.  He also conducts writing conferences and serves as an after-school tutor to help students with upcoming tests, or to improve their grades.

Outside of the classroom, Tyler is very involved in OLSH activities.  He oversees the annual Faculty vs. Students basketball game which raises money for the prom.  He can also frequently be seen emceeing events and activities throughout the year.

Tyler has also served as a leader for all five of OLSH’s Chi Rho retreats for juniors and seniors.  “It is a time to unplug, talk to God and to each other, and to be open and honest with yourself,” Tyler explained.

Tyler considers the students at OLSH to be special.  “We teachers really get to know them,” he said.  “They are active, open, and involved, and they interact on multiple levels.”

Tyler finds it most satisfying when a student is struggling but keeps at it until it clicks.  “Knowing you had an impact is a nice feeling,” Tyler said. He also finds it rewarding when former students keep in touch with him.

In the short-term, Tyler is excited to focus on the new AP English Literature and Composition class.  “We have a good group of students, and I am excited for the challenge,” he said.  Tyler enjoys getting involved with a variety of things and wearing different hats.  “It keeps me from getting stale in both my teaching and school activities”.

Outside of school, Tyler enjoys sports and fitness and has worked as a personal trainer.  He also admits to being a “pretty big” Comic Con fan and attends the event each year in Philly with his family.  His primary focus, however, remains on OLSH and all that is yet to unfold.