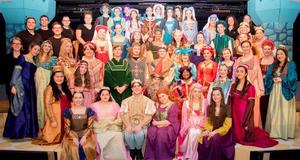 The cast and crew of the OLSH Spring Musical, "Once Upon a Mattress", was nominated for six awards including Best Scenic Design, Best Costume Design, Best Lighting Design, Best Crew/Technical Execution, Best Actress: Alyssa Brinza, and Best Musical Budget Level 1!
The OLSH Theatre Department has been putting on outstanding full-scale musical productions for many years now. For the last twenty years, the production team of Dolores Manuel and Heather Taylor have been guiding students as they discover their talents and share them with OLSH audiences. This year the department took on the show "Once Upon a Mattress" - the story of the Princess and the Pea. With a strong cast of talented leads and ensemble members, the show delighted audiences for two weekends in early March.
This morning, the seniors in the cast gathered with Ms. Manuel in the OLSH music room to watch a live stream of KDKA's Pittsburgh Today Live, where some of the nominations for the Pittsburgh CLO's Gene Kelly Awards for Excellence in High School Musical Theatre would be announced. The Awards program has been a highlight of the OLSH theatre experience, with the group receiving 74 nominations since 1998.
This year the cast, crew, and production team celebrated as they learned they had received six total nominations:
Their nomination for Best Musical will earn them the opportunity to perform a number from the show on the Benedum Stage during the Awards on Saturday, May 25. Alyssa Brinza '19 will also perform with the five other Best Actress nominees from area schools.
Tickets for the event are extremely limited. If you would like to purchase tickets through the school, you must contact Dolores Manuel at dmanuel@olsh.org before 4:00 pm today (Tuesday, May 7). The student/parent ticket order form can be found here.
Print