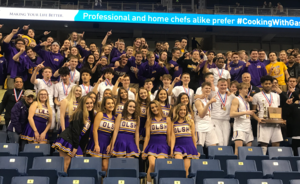 The year of making school history in athletics continues with this win!
The third time was a charm for the OLSH Chargers boys basketball team! The team made their third appearance in the WPIAL championship game today and they came out on top beating Serra Catholic 65-46. This is the first WPIAL Championship for the team, head coach Mike Rodriguez, and staff. This win is historic for the school on its own, but combined with the girls basketball team championship yesterday and football's championship in the fall, the Chargers are having quite a year!
The school community will celebrate with a pep rally on Monday morning after homeroom.
Congratulations to the players, parents, and coaching staff on this victory!
Print