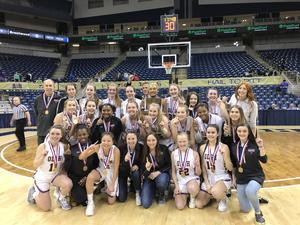 The Lady Chargers beat Brentwood 50-48 this evening to take the WPIAL 2A Girls Basketball Championship! This is the program's first title win and the first title for a girls team at OLSH!
The Lady Chargers held the lead throughout the entire WPIAL 2A Championship game! Brentwood got within one point, but couldn’t overcome the Chargers, even in the final seconds as a foul on the buzzer gave Brentwood the opportunity to tie. This victory marked Head Coach Don Eckerle’s 300th win with the Chargers. School history has been made once again this year as this is the first WPIAL Championship for girls basketball and the first WPIAL Championship for a girls team from OLSH.
The girls received an escort back to campus from the Neville Island, Coraopolis, and Moon Township VFDs and the school community will celebrate Friday morning with a pep rally.
Congratulations to the players and coaches on an outstanding season! Way to go Chargers!

Tomorrow it’s the boys’ turn as they take on Serra Catholic in the WPIAL Championship game at 5:00 pm!
Print