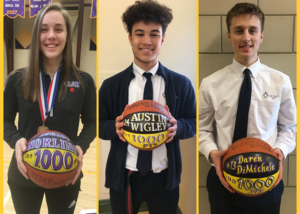 Congratulations to seniors Ashley Norling, Austin Wigley, and Daren DiMichele on surpassing 1000 game points during the 2018-2019 basketball season! Both the girls and boys basketball teams won the WPIAL 2A Championship this season - a first for both programs!

Ashley Norling, a guard/forward, will play women's basketball at Pitt-Johnstown next fall.

Austin Wigley is a forward who will play men's basketball at Dodge City Community College next year. He was also a member of the WPIAL champion OLSH football team.

Daren DiMichele is a guard who plans to attend Robert Morris University next year. He was recently named Times Athlete of the Week and was featured in a Post Gazette article highlighting his family's success in basketball over the years.

Daren and Austin will be joined by teammate Ricco Tate in the Roundball Classic on April 13 at 6:00 pm at Geneva College.

Ashley and girls head coach Don Eckerle will represent the OLSH girls in the Roundball Classic on April 13 at 2:00 pm at Geneva College.